Boy May Have Less Than A Week To Live If He Does Not Get A Liver Transplant | Milaap
loans added to your basket
Total : 0
Pay Now

Shares
Shares
Share on whatsapp
Everyone in the small village of Routhupalli, Andhra Pradesh knows Sushanth as the most obedient and responsible 10-year-old. He would help his mother with house chores before school, and help his father on the farm, after. He’s popular among his classmates too. He was happy and cheerful, before this deadly liver disease took over his life. Now, his feet and stomach are painfully swollen, he can't eat or get up from his bed - an indication of how critical his condition is and how little time he has left.

With today ending, Sushanth will have just 7 days left to get a liver transplant. Sushanth is now living on borrowed time.

Two months ago, on his way back form Sunday mass, Sushanth felt a pulling pain in his arms and legs. That night, Sushanth had a high fever. It was Jaundice – the yellow tinge in his eyes, the slight swelling of his arms and legs. The signs were telling. However, the local hospital in their village couldn’t diagnose the underlying, more dangerous disease.


Sushanth with his uncle while they were feeding their buffaloes

“We took him to Guntur where we found out that his liver is completely damaged. They also told us that it was too late for them to save him. ‘take him home, there’s no hope’ they said.” - Bhaskar

But Bhaskar did not give up. He took Sushanth to Hyderabad where they said he has 7 days to get a new liver.

The disease can affect his vital organs, or worse, kill him

Sushanth has Wilson's disease, an inherited condition where the liver fails to flush out copper from the body, leading to an excess copper buildup in the liver hence damaging it. If not treated in time, the copper will flow into kidneys, brain and eyes through bloodstream causing liver failure and brain damage.

“From the past two days, he’s become so irritable and angry. I don’t know if it’s because of the medicines or his disease, but he’s not the Sushanth we knew.” - Sirisha

Time is ticking, but Bhaskar can't arrange for 18 lakhs in 7 days

With his income of Rs 250 per day that he earns as a farmer, Bhaskar could manage to look after his two children including his elder daughter Hepsyba (13) and his wife. But ever since he got to know that Sushanth’s liver is damaged, he’s been asking his neighbors, friends and everyone to help him save Sushanth. He could arrange Rs 30,000 with their help but it was only enough for his tests and medicines.

“We told the the doctors that we are in no position to arrange such huge amount in such short time. Crowdfunding is my only other option. I will be eternally thankful for your help.” - Bhaskar, father

Sushanth’s liver was completely damaged in just a matter of a few weeks. He doesn’t have much time left without a liver transplant. All Bhaskar and Sirisha can do is helplessly count down to the day of his transplant. Every minute is crucial, and every contribution can bring him closer to getting the transplant in time.

Bhaskar needs your help to save his son 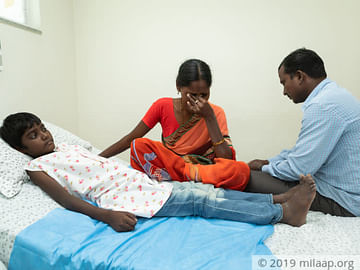 His jaundice worsened so much that it damaged his liver completely

UPI: givetobhaskarfunds@yesbankltd (Copy to clipboard)
Or
Click here to read the instructions before you make a bank transfer.