Milkman In Severe Debt Can't Save His 12-Year-Old From Cancer On His Own | Milaap
loans added to your basket
Total : 0
Pay Now

Shares
Shares
Share on whatsapp
Subhajit is 12-years-old but not new to the chemotherapy sessions, neither is he unaware of the side effects the treatment has on him. But he is determined to get better and make the most of his life. Of course, these days, this little cricket fan is excited to meet Sourav Ganguly. He has heard that the hospital is planning to arrange a meeting of the cancer ward patients with Sourav Ganguly and it’s this thought that is helping him sail through the painful treatment.

As Nirmal and Rina sit beside their son’s bed, trying to comfort him in his pain, they are reminded of the first time their son was diagnosed with Acute Lymphoblastic Leukemia in 2015. It is one of the most common paediatric cancers that affect the bone marrow and the white blood cells.

“Doctors told us that with treatment my son has a very high chance of getting cured. We did everything in our capacity. He got better and was going to school. He fared so well in his exam. But four months back during a regular check up, we were asked to do tests only to figure out that his cancer has relapsed,” - Nirmal, father.

An old pic of Subhajit

Already in debt, Nirmal doesn’t know how he can afford his son’s treatment

Last time, Nirmal had spent more than Rs 3 lakhs for the treatment. His family and neighbours helped him arrange the money, but it wasn’t enough. He had to sell the two cows- that was his only source of income.

“I didn’t regret selling the cows, I was happy I could arrange for the money to get Subhajit treated. Since then, I have been doing odd jobs to support my family. I don’t even make the Rs 3000-4000 I used to make earlier. Now my condition is even worse.”

Nirmal is asking for your help to get his son better

Hailing from Jalpaiguri, a small town in West Bengal, Nirmal now has nothing that he can call his own. He is neck-deep in debts and in no condition to arrange for the 10 lakhs that are needed for Subhajit’s chemo and radiation therapy. He is pinning all his hopes on you - a little help will go a long way. 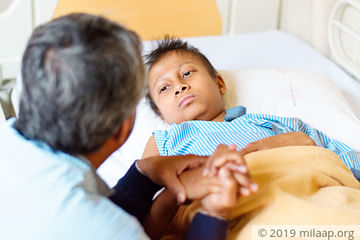 Son Of A Poor Father, This 12-Year-Old Needs Help To Fight Deadly Cancer

His father is in debt, he can't afford the treatment