Illiterate Mother Struggles To Take 1-year-old Who Needs Liver Transplant To Hospital Miles Away From Home By Herself | Milaap
loans added to your basket
Total : 0
Pay Now

Shares
Shares
Share on whatsapp
"His cries fill the entire house with pain. Nothing I do to comfort him is actually helping him anymore.  The doctor says he has very less time left without a liver transplant, but we don’t have that much money", says Mahadevi in tears. Her baby Soham is fighting a dangerous liver condition that has put his life at risk.

Her farmer husband cannot go to the hospital that is so far away from the village, because missing even one day of work can put them in a worse state than they are in already. Every day is a challenge for this mother who is struggling alone to save her son's life.

Baby Soham is inconsolable throughout the day

Just two days after Soham was born, his parents Shrikant and Mahadevi noticed that his entire body had a yellow tinge to it, especially his eyes. He also passed white stools. They took him to the local medical centre in Khanapur, Maharashtra, where the doctors assured them that it would go away on its own. The unassuming and uneducated parents believed that their child would be alright, but his problems only started getting worse.

“The baby just wouldn’t stop crying at all. The yellowness didn’t go away either. We got really scared because he also started drinking less breastmilk. We rushed him to a district hospital where they told us that Soham’s condition looks quite bad and that we need to take him to Hyderabad for better treatment. Somehow we gathered enough funds and took him there. After a couple of tests, the doctor told us that he has a very rare liver disease and started him on medicines immediately.”- Shrikant, father

Soham’s liver disease is rare and fatal, His parents are scared of losing him any moment

Soham’s liver does not have the same number of small bile ducts as a normal liver. This is causing problems with bile drainage in his system, and an increase in toxins in his blood which in turn causes itching and irritability. In due course of time, his liver function may be halted completely, leading to death.

“He was on medicines for over 6 months after his birth, but that didn’t help to improve his condition at all. He has not slept well in a long time. He goes hungry for most of the day. Sometimes, he has a little milk, that’s all. I don’t think he will survive if things go on like this; it scares me” - Mahadevi

This baby is severely underweight, has vitamin deficiencies and growth disabilities because of his bad liver

Soham is not like any other normal baby his age. At a point in life where normal babies explore their surroundings and try interacting with their parents, all Soham can do is cry out in pain because his liver is failing him. He has not even tried to stand up by holding yet, let alone walk. His vitamin deficiencies are evident as he looks very small for a 1-year-old. Instead of babbles and giggles, all he does is cry and wince as he itches his bleeding skin.

It is up to Mahadevi and relatives to take Soham to the hospital in Hyderabad because Shrikant cannot afford to miss a day of work; he works as a farmer on somebody else’s land and earns around Rs 1,000 to Rs 2,000 a month. His earnings weren’t enough to feed the entire family, but now expenses have doubled. He has already spent around Rs 2 lakhs so far on Soham’s treatment by borrowing from moneylenders at high interest.

“There is no way that my husband can afford this surgery. My relatives have been helping a bit but even their resources have exhausted. We are a BPL family and we cannot even dream of Rs 16 lakhs, how will we make this in time for the transplant” - Mahadevi

Your small contribution can save this child from liver failure 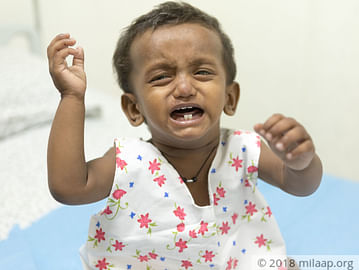