Only A Surgery In 10 Days Can Save This 9-Year-Old From Deadly Liver Disease | Milaap
loans added to your basket
Total : 0
Pay Now

“Even few months back, all my time was spent running around the house after Sifat. He was always up to some mischief and even if I took my eyes off him for a minute, he would end up creating some mess. I remember scolding him for being so naughty back then, but now I wish we could go back to that time. These days he hardly gets up from his bed - he complains of an excruciating pain in his stomach. He is very weak and has lost so much weight. The doctors say that a liver surgery can cure him of his problems but I don’t know how a poor family like ours can arrange for so much money for the surgery. I fear that we will lose him unless we have the money.” - Helena, mother of 9-year-old Sifat.

Sifat has been diagnosed with Stage III Hepatoblastoma and only an urgent liver surgery can help him survive. It is a cancerous tumor that starts in the liver and sometimes even spreads to the other parts of the body. It all started when Sifat started having recurrent fever. Initially, his parents thought that it was nothing more than a viral infection. But when the over-the-counter medicines did not work and Sifat started vomiting out everything he ate, they realised that it was something serious.

“We immediately took him to the doctors, who conducted some tests. The test results revealed that my son has a cancerous tumor in his liver. I did not know how to react. Such a little boy with cancer - I felt as if my whole world came crashing down. Now the doctors have said that his only chance of survival is through a liver surgery in 10 days.” - Helena.

Sifat has been undergoing chemotherapy soon after he was diagnosed with cancer. His entire skin has turned black and he is very frail.

“Often there are nights when I sit with Sifat just outside the washroom. He feels so nauseated and also complains of the sharp pain in his stomach. Sometimes, during the daybreak, he falls asleep on the my lap as I am sitting on the bathroom floor. I look at his face and tears roll down my cheeks. But the very next morning, he has a smile on his face, assuring me that he will soon be better.” - Helena.

The family has travelled a long distance from Bangladesh for Sifat’s treatment. Abul Kalam, the father, is a security guard at a private bank and his salary is not enough to support his son’s treatment. He is the sole earning member of his family.

“My husband hardly gets any leave from his work so it’s just me and my son all alone in an unknown city. Even a simple thing like communicating with the doctors has become so problematic, Sifat helps me with the English even in his sickness.  All my days are spent worrying about him and thinking how can I arrange for the fund for his surgery. My relatives and friends have already helped me with 4 lakhs but the surgery would require another 8 lakhs. Sifat wants to be an engineer when he grows up, I hope I will be able to support him fulfil his dreams.” - Helena.

9-year-old Sifat has a cancerous tumor in his liver and the only way for him to survive is through an urgent liver surgery in a matter of 10 days. Abul Kalam’s meagre salary is not enough for his son’s treatment. Only your help can save Sifat’s life, give him a normal life and fulfill his ambition.

Your support can save Sifat 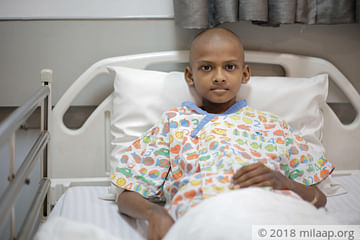 Sifat has a severe pain in his stomach and he cannot eat anything at all.