After A Tragic Accident, Young Girl's Only Wish Is To Start Walking Again | Milaap
loans added to your basket
Total : 0
Pay Now

After A Tragic Accident, Young Girl's Only Wish Is To Start Walking Again

Shares
Shares
Share on whatsapp
One can never find Shubhanjali without her books at her home at Deoria, Uttar Pradesh. She dedicated most of her time to her studies, and during her leisure time she would help her mother in her daily chores. But her life changed when she met with a tragic accident on 4th October 2016. She lost movement in her lower limbs. Shubhanjali was heartbroken when she realized that won't be able to do anything that she used to.

But with time passing by, she slowly regained her spirit. And now, after clearing her 12th exams with distinction, she is now determined to get a college degree. It's the only thing that keeps her motivated to stay positive. No matter what difficulty life has thrown at her, Shubhanjali has been fighting it bravely and now she's needs one more surgery to hopefully start walking again.

A tragic accident shattered Shubhanjali’s dreams of becoming a doctor

It was just another casual day for Shubhanjali and she was on her way back to home from school with her brother Shubham Singh (21). She was sitting on the backseat of her elder brother Shubham’s bike and was eagerly waiting to go home and start preparing for the upcoming test in her school, when her brother applied sudden brake to save a man who was passing by. Shubham escaped with minor injuries but Shubhanjali risked losing her life as her spinal cord was completely severed and she was completely bedridden ever since. She never knew her whole life was going to change after the accident.

Shubhanjali was rushed to the hospital soon after accident. Her parents thought they were losing their only daughter and throughout their journey from Devariya to Lucknow, Uttar Pradesh, they were tearfully praying to every God to keep her alive. Punju recalls the day and says, ‘It was one of the most painful journeys I’ve ever had in my life. My daughter was frothing from her mouth and lost her consciousness. I thought I lost her.’ Shubhanjali was soon taken to the ICU and underwent an operation immediately.

After 2 years of being completely bedridden, Shubhanjali finally found hope

It was a relief for Shubhanjali’s parents to know that the surgery that Shubhanjali underwent was successful. But the sense of relief they had lasted only for a moment when the doctor’s told them that Shubhanjali won't be able to walk on her own. She is able to move her hands but her legs does not have any kind of sensation. After spending 2 years of her life on a wheelchair and undergoing various treatments, Shubhanjali now needs to undergo one more surgery. It's her only hope to stand on her own and start walking again.


“My daughter has truly been a fighter in such difficult times. Some days it breaks my heart looking at her being completely dependent on the wheelchair. But Shubhanjali has always been positive. She would just say, ‘Mumma, I know that I will walk on my own someday. Once the operation is done, you won’t be seeing me in wheelchair or lying in the bed anymore.’ It is her positive spirit that relieves me from all the pain and motivates me to give my daughter the life she wants.” - Punju Singh, mother

Bhagwanth owns a small shop where he sells parts of electrical appliances. By running his little shop, he earned a meager income Rs 5000 per month and worked hard to provide his family with a decent life. Bhagwanth used all his savings and even took help from his friends and relatives for the life-saving surgery that his daughter needed. He has spent 8 lakhs so far for the surgery that Shubhanjali underwent along with post-surgery treatment. Now Shubhanjali needs one more surgery to get back to normal life. But after spending what all Bhagwanth had and with debts to be cleared, he cannot afford one more surgery for his daughter.

Shubhanjali has been paralyzed from chest down and needs others support even to sit on the wheelchair. But this didn’t dampen her spirits. Instead she was motivated to improve her condition. Shubhanjali and her family believes that she can start walking once again after one more surgery. Only your kind support can help Shubhanjali stand on her feet before she starts going to college. 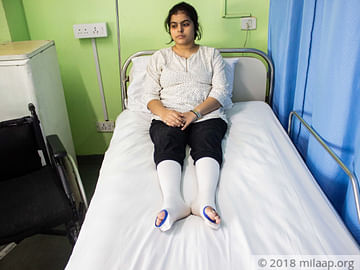