This Teenager Who Dreams Of Becoming An IPS Officer Needs Your Help To Fight Cancer | Milaap
loans added to your basket
Total : 0
Pay Now

Shares
Shares
Share on whatsapp
‘I have been more like a friend than a father to my son. He always used to talk about becoming an IPS officer and I always encouraged him to achieve his goal,’ says Ravi Chandra as he looks at his son, Shanmukha Srikar. But now, unfortunately, Shanmukha has stopped talking about his dreams and asks his father only one thing, ‘What happened to me, nanna? For how long do I have to stay in the hospital? Ravi Chandra dreads telling him the truth - that he’s battling a deadly cancer as he knows that his son would be completely devastated and will even lose hope.

Each day Ravichandra lives in constant fear of losing his son as he has no money left to continue the treatment. Shanmukha Srikar can fight cancer only with your help.

Shanmukha never thought of anything beyond his studies

Shanmukha Srikar was a hard-working and energetic teenager who used to spend all his time on his studies. He had only recently started going to college in his village Tadigadapa, Andhra Pradesh along with his elder brother Nitish (21). Shanmukha was so excited about going to his college and learning new things that he never missed a day of his college. Just as he finished his semester-end examinations, Shanmukha started complaining about a shooting pain in his stomach and back. His mother Himabindu believed that it was nothing but food poisoning when she took him to the doctor.

Despite medication, the pain didn’t subside - his condition started getting worse. Shanmukha’s parents took him to various hospitals and consulted various doctors, but they couldn't understand what was happening to their son. ‘Shanmukha was growing weaker, unable to even get up from his bed. We were worried about his health and helpless for not knowing what was happening to him. We then took him to Vijayawada (Andhra Pradesh). I was in utter shock, when I was told that my son had cancer.’ says Himabindu.

His dreams and his life - everything came to a standstill

"All he wants is to go back home and start going to college. But he can’t. Cancer has changed my son completely. He looks weak and famished. He has even stopped talking and is always lost in his own thoughts." - Himabindu, mother.

Shanmukha was diagnosed with Burkitt’s lymphoma, a rare and aggressive form of cancer that affects the immune system that helps the body fight infection and diseases. Himabindu and Ravichandra were shattered when they were about his son’s condition. Shanmukha needs to undergo chemotherapy to recover from this dreadful cancer, otherwise it will spread to his entire body and worsen his condition even more. Shanmukha has currently undergone 2 chemo sessions. He is making progress but he can only get better if his treatment is continued.

He needs your help to fight cancer

A lab technician by profession, Ravichandra could manage looking after his family by earning a meager income of Rs 8000 per month. To save his son from cancer, Ravichandra borrowed Rs 1.5 lakh for others for his treatment expenses. He could start Shanmukha’s treatment with what he borrowed but now he needs help to continue his treatment.

Shanmukha’s aspirations of becoming an IPS officer has come to a halt because of a deadly cancer. He needs your help to fight cancer and pursue his dreams. 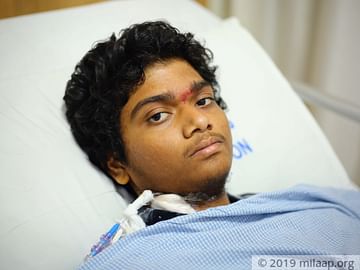 Shanmukha Srikar is suffering from cancer and he needs immediate chemotherapy, please help