A Terrible Accident Shattered This Man's Spine And Took His Leg | Milaap
loans added to your basket
Total : 0
Pay Now

S
You are sending a message to
Sontosh
Go back

A Terrible Accident Shattered This Man's Spine And Took His Leg

It was a little past 1am, and 26-year-old Sathish was on his way home from work. He was just minutes away from his room, when a car rammed into his bike, sending him sprawling on the street. He was rushed to the hospital by the policemen around, but the damage was already done… and it was irrevocable.

“At 3 in the morning, I got a call saying my brother had met with an accident. Assuming it was going to be some minor injury, my mother and I started for Bangalore. But when we saw the state he was in, we were shocked. They told us he was lucky to have survived. His shoulders, his legs, his spinal cord, face; they’re all seriously damaged...” – Santosh, brother

The Accident Spared His Life, But It Took Everything Else..

The accident has cost Sathish his right leg, but he hasn’t been told yet. He has undergone two surgeries on his left leg, which has suffered severe bone damage. His mouth has been badly bruised, which needed surgery as well. Although conscious, it has been two weeks since he’s said a word. With three surgeries done in his shoulders too, Sathish is in a lot of pain. But along with him, his family suffers.

“His leg was lying next to him! I did not know what to do. I begged the doctors to put it back somehow. They said it wasn’t possible. Assuming it was because his leg was seriously damaged, I begged the doctors to give him my leg; my legs were okay. I thought it’d work… But they said they couldn’t do that either… So my son has to remain with only one leg…?” – Sathish's mother, breaking down

With prolonged hospitalization, Sathish will recover

Initially, the chances of his surviving were low. But now, over the weeks, with consistent treatment and hospital care, Sathish’s condition has improved considerably. He needs a few more surgeries in his spine and his leg, and with another month of treatment, he can go back home. But all this cost this family 25 lakh rupees, and they can’t even dream of affording it.

Until now, the family depended on Sathish for a living, but now his life depends on them

Santosh and his father Mohan practice farming on others’ lands and earn no more than 5,000 a month. It was Sathish who supported his family until now, by working as a counter manager. He earned 12,000 a month, of which he sent 5,000 to his family, and managed with the rest.

“He’s the youngest, but he took full responsibility of the family. Now he’s here… waiting for us to save him. My father stayed back in the first place because he couldn't stop his work, now he's working more than ever. Even if he makes 100 Rs a day, he says it’ll help us save Sathish. We don’t work to save for the future. We work so we have food to eat, for tomorrow. Affording even thousands is beyond us; how can we gather 25 lakhs?” – Santhosh

He toiled hard, to support his family. Today, no matter how hard his family works, they won't be able to support Sathish. You can help them save him.
Donate 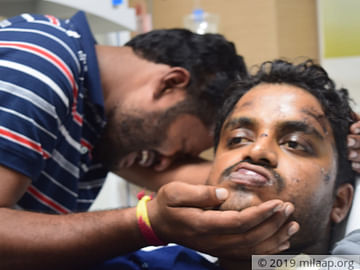 His legs, shoulders and spine have been severely injured. He needs a month's treatment, to recover