Instead Of Gaining Knowledge From Books, This 12-Year-Old Is Getting Lessons Of Pain And Death From Cancer | Milaap
loans added to your basket
Total : 0
Pay Now

Instead Of Gaining Knowledge From Books, This 12-Year-Old Is Getting Lessons Of Pain And Death From Cancer

“While all his friends pack their books and bags for the next day of school, Revanth waits for his next cycle of chemotherapy in the hospital. He knows he has a disease called cancer. He’s seen so many children around him in the hospital going through the same thing. He knows it’s more serious than a fever, but the fact that he can die because of it is something he doesn’t know or understand yet."

Revanth is battling dreadful cancer for the second time

Revanth was first diagnosed with cancer in February 2017 when he lost his appetite and drastically lost weight. In a matter of days, he went from being 36 kgs to 29 kgs. Munirathnamma and Gopal hoped that the medicines he was given will make him healthy again, never imagining that their son has cancer. After 8 months of chemotherapy, they thought he had beaten cancer for good. Sadly, 6 months after they thought he was cured, his cancer relapsed, deadlier than ever.

They thought the horrors of cancer were far behind him

“We came to Bangalore only for his routine checkup. He was supposed to start school soon, and we had just bought him a new bag and books. He was excited and restless, for a year his life had been consumed by cancer and going back to school was the what he needed to get back to normal life. But the news we got at the checkup was something we were not prepared for.”

Bone marrow transplant is the only chance for Revanth to survive

Cancer has not only taken away the 12-year-old's physical strength, but it’s made him extremely lonely. Miles away from his home and friends, Revanth’s only hope is that he’s quickly cured of this disease that has made its way back in his life and torn it to pieces once again. This time, only a bone marrow transplant can save him.

After spending lakhs on his treatment already, his parents have nothing left to save him

Munirathnamma works as a typist, while Gopal is a primary school teacher in Kolar, Karnataka. They had saved a little to support both their children’s education, but all their savings were washed away with Revanth’s diagnosis. Now, they’re struggling to find a way to get him the treatment that will cost them ten times more than it did the last time.


“It’ll take us a lifetime to arrange for such a large amount, and our son doesn’t have that much time. They started chemotherapy as soon as we found out his cancer had relapsed. There’s no time to waste now. We somehow managed to get him treated the first time by taking loans, but 42 lakhs is unimaginable for us.”

Revanth bravely fought cancer the first time, but now it’s back, more dangerous than ever. Revanth needs chemotherapy and a bone marrow transplant at the earliest to beat cancer once and for all. His parents have exhausted everything on his treatment the first time and have nothing left to save him now. Revanth can finally go home, alive and healthy with your help.

Your support will save Revanth from cancer. 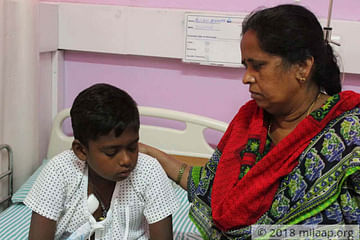 He Thinks It's All Temporary, Unaware That Cancer Can Kill Him

This time, only a bone marrow transplant can save this 12-year-old's life.