80% Of This 10-year-old's Skin Has Peeled Off Due To A Deadly Disorder | Milaap
loans added to your basket
Total : 0
Pay Now

“He was so cold because all of his skin had peeled off. Every spot on his body was burning and he was just shouting in pain. First, he used to get fits, and now his body has barely any skin. I can’t even look at his face without shedding a tear.” – Rashida, Rehan’s mom.

Suffering from a painful rash and blisters all over his body peeling most of skin off, 10-year-old Rehan has been tormented by an extremely rare and life-threating disorder. His only hope of survival is to remain in the ICU for, almost, over a month and undergo the countless procedures and treatments but his mother is so poor that she can’t even afford a day’s expense.

Rehan used to suffer from dangerous seizures every then and now, his skin peeled off as a bad reaction to it

10-year-old Rehan used to suffer from occasional seizures from birth. When it happened, his eyes would roll up, fingers would curl up and his entire face would look disfigured. This really scared his mother Rashida.

The seizures used to be horrifying. Then with some medicines, his seizures were less frequent. After starting some new medicines in May, Rehan had some shocking reactions. He would constantly scratch his skin and slowly, he got blisters and boils all over his body. His skin was just falling off. His skin would burn every time he touched it and he would just cry out in pain. He would tell me, 'I’m in so much pain, please make it stop, I don’t want anything else" – Rashida

Rehan is suffering from a very rare skin disorder known as toxic epidermal necrolysis which is a harmful reaction and infection that can kill him if untreated. With more than 80% of the 10-year-old’s skin peeled off, death may come for him soon without proper treatment that his mother is struggling to afford.

“Rehan feels so cold and trembles because he doesn’t have any skin to protect him. He had constant fever and he would just cry so much and fall asleep. He doesn’t want to eat or drink anything because he’s in so much pain. He keeps screaming because it is intolerable.” – Rashida, while weeping.

Due to the deadly infection, Rehan’s eyes are in danger too and right now, he is in the ICU supported by the ventilator. The 10-year-old cannot survive without undergoing a multitude of treatments in isolation in the ICU for more than 4 weeks. His parents are so poor that even a day spent at the ICU is more than they earn.

Alone, Rashida is desperate to save Rehan and send him to school again

“My husband, Moulali, works as a driver and we get around Rs. 300/day and may lose his job if he takes many leaves, leaving me to manage everything. Rehan’s skin needs to be dressed every day and he is also fed through tubes. Every day there is some new treatment he goes through. The bills have already crossed Rs 5 lakhs and there I don’t know where we will get so much money from. It costs well over Rs. 20,000 daily. I don’t know how we’re going to save him. He was such a nice boy, he’d play with all the kids and love school. I’m so shocked and terrified to see him like this.” – Rashida

Almost all of 10-year-old Rehan’s skin has peeled off due to a deadly and rare infection. His only hope of surviving this is if he remains isolated in the ICU for a prolonged period of time receiving the several life-saving treatments he needs. With his father away, his mother has absolutely nothing left and she can’t save him without your help.

Your support will save 10-year-old Rehan from a rare but deadly infection and ensure that he can live without pain. 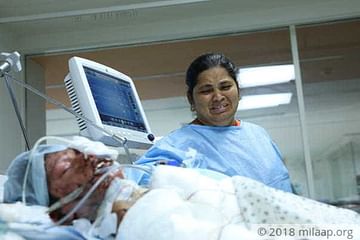 Covered In Blisters And Rashes, Rehan Screams Out In Unbearable Pain

With Rs. 300/day income, his mother is struggling to save her child from this brutal disease

UPI: givetorashida@yesbankltd (Copy to clipboard)
Or
Click here to read the instructions before you make a bank transfer.