Young Boy Who Lost His Voice Due To Severe Infection Will Lose His Life Without Urgent Treatment | Milaap
loans added to your basket
Total : 0
Pay Now

Shares
Shares
Share on whatsapp
The first thing Reddya did when he came back home from the hostel for Diwali, was go out with his father Kadaraiah to buy his favourite crackers. He was excited about the celebrations, but the very next day he felt weak and was unable to get up from his bed. He had a high fever and despite his mother, Ogulamma, giving him medicines, he didn’t get better. Two days later, he had a swelling on his neck. He called out his father and said, “Nanna! I cannot bear this pain,” and those were the last words Reddya spoke. He lost his voice a few hours later because of a severe infection. Now as he tries to speak to his parents while they sit beside his bed in the ICU, they can only see him moving his lips but they cannot hear anything. His poor parents were devastated when Reddya lost his voice and now they fear their only son might lose his life too if they don’t continue the treatment.

After 8 years of marriage, Reddya brought happiness to his parents whose only wish was to have a child

After years of regular medical follow-ups, Ogulamma conceived and gave birth to Reddya. Ogulamma and Kadaraiah pampered Reddya with lots of love and care. He lived with his parents in a small village near Cuddapah, Andhra Pradesh, and they sent him to a government school which is 50 km away from their village for a better education. Reddya lives in the hostel and his parents would visit him often. Every time Reddya came home for the holidays, Ogulamma would make his favourite chicken curry for him and Reddya would happily eat it to the last bit. Reddya would spend his entire vacation with his parents, telling them every story from school. They thought that Diwali too would be the same.

“My son was happy and excited when he came home for Diwali. But the next day he had a high fever and two days later, there was a swelling near his throat and he was unable to speak. We took him to the doctor and he was diagnosed with typhoid. Despite giving him medicines, the swelling near his throat didn’t reduce. He then struggled to breathe and lost his voice completely.” - Ogulamma, mother

Reddya needs to stay in ICU for longer, otherwise, the infection will spread to his entire body

Reddya’s parents were scared when he lost his voice and as per the local doctor's suggestion, they took him to Chennai, Tamil Nadu. Reddya was then diagnosed with diphtheria, a severe infection that mainly affects the nose and throat. The infection has also affected his larynx, also known as the voice box, due to which Reddya has lost his voice. The infection has already spread into Reddya’s heart and kidney and he’s now on ventilator support. His parents have managed to take care of his treatment for a few days but now they have no funds to continue his treatment. Reddya needs to stay in the ICU for 15 more days. It’s the only way for him to recover from the infection and regain his voice.

“The past 17 days have been really difficult for us. We spent our days and nights in the waiting hall praying to every God we know for our son’s recovery. Every time we go the ICU to see him, he starts crying. I hold him and try to console him saying that he will get better in a few days and we’ll take him home. Though he cannot express the pain he’s going through, I can still feel it when he looks at me with his teary eyes.” - Ogulamma, mother.

To save his only son from dying, Kadaraiah borrowed large amounts of money to start his treatment

Kadaraiah works as a farmer earning a meagre income of Rs. 6000 per month to look after his family. Kadaraiah always worked hard to provide his only son with the best. But now every day he’s struggling to provide his son with the life-saving treatment. He could only start the treatment by borrowing 5 lakhs from others, but now after exhausting all the money he borrowed, he cannot continue it.

“Despite hardships, I have always given my son everything that he had asked for. But now I’m not even able to provide him with the treatment that can save him. I don’t want to lose my son. He’s the greatest blessing I’ve ever had. I want nothing more than my son to be as healthy as he was before.” - Kadaraiah, father.

Reddya needs to stay in the ICU for 15 days more to recover from the infection that has taken away his voice. He can regain his voice and strength if he continues his treatment, but his poor parents have exhausted everything they borrowed and are struggling each day to continue the treatment. They need your support to help their only son recover from this fatal condition. 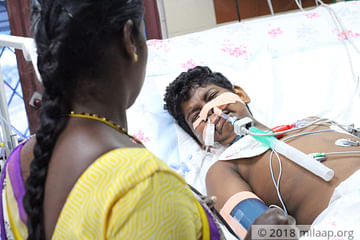 UPI: rzpy.givetomlpreddya00002@hdfcbank (Copy to clipboard)
Or
Click here to read the instructions before you make a bank transfer.