Young Boy Wants To Survive Brain Tumour And Become An Engineer, But His Parents Are Helpless | Milaap
loans added to your basket
Total : 0
Pay Now

Young Boy Wants To Survive Brain Tumour And Become An Engineer, But His Parents Are Helpless

Shares
Shares
Share on whatsapp
As Rahul and his mother sat in silence at the park, Savitra thought of all the ways she could make her son feel better. She thought a change of environment would cheer him up, but 12-year-old Rahul was lost in thought about the past few years. For three years now, his life has only been about the deadly tumour in his body, but it was not until a few months ago that Rahul understood what was happening to him. He's the only one that can read English in his family, so now Rahul often reads his medical reports to explain to his parents about his disease. After sitting in silence for nearly an hour, Rahul finally said  "Amma, I want to work hard. I want to become an engineer and earn well to help people, no one should suffer the way I have." Unfortunately, Savitra could say nothing in return. With only one week left to save him, Jalindar and her are now more helpless than they've ever been.

Three years ago, Rahul’s life changed when he came back home with a bleeding nose. Savitra was shocked assuming that he had a fight with one of his classmates. Rahul was always kind, and all his teachers had only nice things to say about him. Little did she know that a growing tumour was causing her son so much pain. Rahul was then diagnosed with nasopharyngeal angiofibroma, an aggressive tumour that grows in the back of the nasal cavity and grows into the fissures of the skill.

“I had so many questions when the doctor told us what it was, but the only thing I asked was ‘Will my son live?’ “  - Savitra, mother

Two surgeries later, Jalindar and Savitra thought that their son was finally free of the tumour in his nose and can now have a normal childhood. However, in May this year, a scan revealed that the tumour has now spread to his brain.

Despite his grave diagnosis, Rahul continues to work hard and persevere

Rahul’s condition is getting worse by the day. He’s now extremely weak on most days, bleeds from his nose and struggles to breathe. However, despite all the pain, he continues to go to school.

“He was always a good student, extremely dedicated and hardworking. As soon as he came home he would finish his homework, and then go play with his friends.  The disease might've made him weak, but he’s more determined than ever to realise his dreams of becoming an engineer one day.”

They’ve already delayed his treatment due to lack of funds, now they’re running out of time to save him

Rahul’s diagnosis didn’t just bring the childhood he knew to a standstill, but his parent’s life completely changed. Everything they did from then on, was to try and save their son from the aggressively growing tumour in his body. Savitra was forced to quit her job at a garment factory to take care of him, while Jalindar provided for his family of four with his meagre income of 6000 per month as a welder in small shop. However, after borrowing nearly 5 lakhs from family and neighbours, the helpless parents find themselves falling short. They've already delayed the surgery due to lack of funds. Now, Rahul has one week to get a surgery to remove the tumour, but Jalindar and Savitra don’t have the means.

Rahul has had two surgeries, but it’s not enough. The dangerous tumour in his body is growing and spreading aggressively. Rahul continues to go to school despite the pain with only one hope – that one day he will help someone else in need. After already delaying his treatment due to lack of funds, Jalindar and Savitra are now running out of time to save their son. Rahul has one week left to get a life-saving surgery, and he needs your help.

Your support will save Rahul’s life. 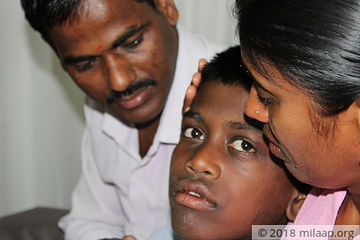 They’ve Already Delayed His Treatment Due To Lack Of Funds, Now They’re Running Out Of Time To Save Him

Rahul has one week to get an surgery to survive the tumour in his brain. He needs your help.