12-Year-Old Who Struggles To Breathe Every Minute Will Lose His Life Without Ventilator Support | Milaap
loans added to your basket
Total : 0
Pay Now

"My son had severe difficulty in breathing, even if he walks for a few minutes his heartbeat grows so rapid that he becomes wearisome. At times, he just opens his mouth widely and gasps for air. Sometimes, he holds me tightly and cries loudly that he is not able to run, walk and stand even for a few minutes. Even before we could understand what was happening to him his condition deteriorated drastically. Now he can't breathe on his own, he is on ventiator support. He has become so weak that he cannot even move his hands. it hurts to see my son go through so much pain at this age." - Pushpavalli, Pavan's mother.

This 12-year-old's childhood is robbed by a deadly disease

A couple of years ago, this 12-year-old had suffered from severe cold and high fever, he also slowly developed difficulty in breathing. When Vijaykumar and Pushpavalli took him to a doctor, they were told that he has breathing difficulties. He was treated in the hospital for a month but a few days ago his condition had worsened again.

"He daily sits by the window with tears in his eyes watching children of his age play. The disease is not only physically hurting but also sickening him mentally. He is often consumed by weakness so much that he just sits on the bed for hours doing nothing but weeping in pain. There isn't a day in the last two years that passed without using the nebulizer machine to help him breathe properly, he just cannot sleep without its help." - Pushpavalli.

The fatal disease is not letting Pavan breathe and move

Pavan is suffering from myotonic dystrophy a disorder that affects muscle functioning and causes muscle loss. The disease had also caused respiratory failure and neuromuscular weakness where the person will have difficulty in movement. He immediately needs ICU support to completely recover from this ailment. Any delay will only worsen his condition.

"My son is unable to breathe properly, the cough and cold in him are causing sharp pain in the chest when he tries to take a deep breath. He cries out loudly with pain and suddenly he goes out of breath. The weakness had bedridden him and he is not even able to move properly. As the days pass by, I can see his health declining drastically. It is agonizing to see how he is fighting for his life every second."- Pushpavalli.

Vijayakumar is a priest in a temple. He is the sole bread-earner of the family. He struggles to run his house with his minimal income of Rs 8,000 a month. This family has already spent 12 lakhs and are unable to afford the only treatment that can save their son from certain death. They are in need of 5 lakhs.


"We have done everything that we could do to save him and have spent all our saving of the future. My husband and I went to every person we could think of to help our son survive but we have only returned hopeless. Now we are left with nothing but prayers." - Pushpavalli.

12-year-old Pavan is suffering from myotonic dystrophy, a disease that bedridden him. He is unable to even lift his hand with severe weakness and he is also struggling with breathing difficulties. Without the support of ICU, the child may never be able to make it and the poor parents are not able to afford the life-saving treatment that can help their son survive.

Your contribution can save Pavan 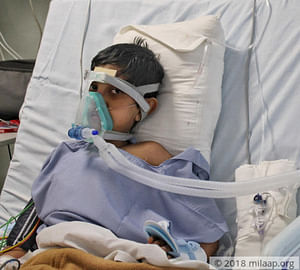 The fatal disease is not letting Pavan breathe and move

UPI: rzpy.givetomlppavankri001@hdfcbank (Copy to clipboard)
Or
Click here to read the instructions before you make a bank transfer.