The Next Heart Attack Can Paralyze Or Kill This 3-Year-Old If He Does Not Get An Urgent Surgery | Milaap
loans added to your basket
Total : 0
Pay Now

Shares
Shares
Share on whatsapp
Eight days ago, little Onkar had a heart attack while lying in his mother’s lap. She was trying to pacify him when he became unconscious and his hands and legs went limp. It left him paralyzed on the right side and he was in the ICU for nearly a week. Onkar is only 3-years-old. If he has another heart attack, it could paralyze him completely or worse, kill him. He needs surgery immediately to fight his heart disease.

Onkar was diagnosed with tetralogy of fallot when he was just a 1-month-old baby. This causes oxygen-poor blood to flow out of the heart into the rest of the body. He also has a hole in his heart. He has been on medication ever since. Besides making him breathless, and turning his nails and lips blue, the disease has also stunted his growth.

“He’s 3, but he can’t walk without support. He can only say ‘mumma’ and ‘papa’. He just isn’t growing. Other children of his age have even started going to play school, but our son is in and out of the hospital. Now after his heart attack, he can’t even hold anything in his right hand.” - Geetha, mother

Onkar couldn’t get the surgery when it was diagnosed due to his weakness. He was also underweight. Now, with his recent heart attack, he’s running out of time. The surgery is the only thing that can save him.

The image of her son, lying limp on her lap is something Geetha will never forget. She often tells Sanjeev that she fears it will happen again soon if they don’t find a way to afford the surgery. Sanjeev, a lab technician in Ludhiana, finds himself at a dead-end.

“I spend more than I earn every month on his medicines and tests. My salary of Rs. 15,000 isn’t enough. I’ve lost count of how much I’ve spent in these 3 years. When I watch my two older children going to school and playing, I wonder when Onkar can do the same. I want to see him happy and without pain.” - Sanjeev, father

This is Onkar’s one chance to survive his heart disease. He needs the surgery within 2 weeks, the earlier the better. Sanjeev and Geetha have managed his treatment so far, but can’t any longer. You can help give Onkar a better life, you can save his life.

Your support will save 3-year-old Onkar and give him a healthy life. 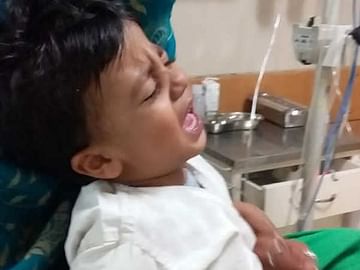 His Heart Disease Has Affected His Brain, It Can Kill Him Without Surgery

Onkar needs a heart surgery within 2 weeks to live.