Farmer Couple Who Has Been Jobless For Months Struggle To Save 6-Year-Old From Deadly Liver Disease | Milaap
loans added to your basket
Total : 0
Pay Now

“My husband and I used to work in a farm for daily wages, before Om fell terribly sick. We had been running from hospital to hospital, trying to figure out how our healthy and active son had become so weak with yellowness pervading every inch of his body. Finally, we were told that his liver is so damaged that he would not survive without a transplant. We have not been able to go to work and are struggling to buy food and medicines for him, how will we afford such an expensive transplant?”-Archana Dighe, mother of 6-year-old Om Dighe.

Archana and Balalsaheb Dighe are poor farmers who belong to a small village in Amar Nagar district, Maharashtra. Owing to their long and erratic working hours, the couple had no choice but to put their elder child, Om, in a boarding school kilometers away from home. They also put their younger child, 5-year-old Parthav, in the care of his maternal grandmother due to the same reason. Everything was going well for this family until one day they got a call from Om’s boarding school last March saying that he was very sick.

“We were suffering without our children but we had no choice; we would not have food on the table if we missed even a day of work. We believed that Om would study hard and grow up if he lived separately from us. But when his school authorities called me and told me that his condition was very bad, I cursed our poverty. If we were not dirt poor, our son would have been with us when we needed him the most.”-Archana, with tears in her eyes.

Om’s eyes and body had acquired a deep yellow tinge, and he was weaker than ever before

Balalsaheb and Archana rushed to meet their son the moment they heard he was unwell. When they reached the hostel, they could not believe what they were seeing: Om had become a completely different child. His whole body, most noticeably his eyes, was yellow. His arms and legs were trembling and he had become completely weak. He was even running a slight fever.

“We begged the warden to tell us what had gone wrong with our child. We asked him so many questions – how long had he been sick? Why didn’t you let us know earlier? – but our questions were met with a cold silence. We immediately took him to a local clinic in our area, and the doctor gave us some medicines. We just prayed for him to be fine.”-Archana.

These desperate parents took their son to many hospitals, but his condition just kept on worsening

“We took him to another doctor in our area, and after that to Pune. We had to leave everything behind and take him everywhere, but we would do anything for our son. We were spending almost all of our savings, but nothing could make him alright. The doctors couldn’t even tell us what was wrong with him and anxiety had taken over us. His weakness reached a point where he could not even walk properly to these hospitals. We were going through hell.”-Archana.

Finally, at a good hospital in Mumbai, Om was diagnosed with a liver disease called autoimmune hepatitis, where there is severe inflammation of the liver, and the body’s immune system turns against its liver cells. Om’s liver is a 100% damaged due to this. His liver cells have almost lost all function.

“My child’s liver is damaged beyond repair. He needs a new liver as soon as possible. His days are counted without it. I don’t know how we will afford it, but it’s the only way we can get him back alive.”-Archana.

Balalsaheb has now gone back to his village to beg for money, leaving Archana to take care of everything alone

Today, Archana and Om are each other’s only support. Balalsaheb has left for their village to beg for money. The mother and son are waiting anxiously for Balalsaheb to come back with good news, although that is very unlikely.

“We have exhausted the last paisa we had. We have nothing left now. I doubt if anybody will be able to give him anything but he wants to try everything to save our son. Our son is dying and we can only helplessly wait for a miracle.”-Archana  .

Om needs a liver transplant at the earliest to survive. He cannot survive on medicines for much longer. His mother, Archana, is a matched donor and everything is ready except the funds. His parents have not gone to work for a long time, and hence have no money to spare for such an expensive procedure. 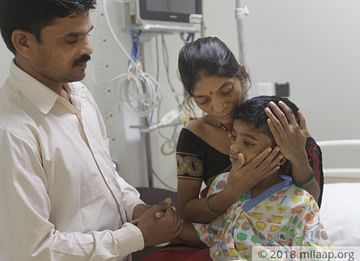 This 6-year-old's parents are struggling to save him from the throes of death. Please support.