20-Year-Old Who Can't Afford Heart Surgery Due To Poverty, Will Lose His Life Without Help | Milaap
loans added to your basket
Total : 0
Pay Now

20-Year-Old Who Can't Afford Heart Surgery Due To Poverty, Will Lose His Life Without Help

“My son had so many dreams. Even though he had to give up his education 3 years back because we could no longer afford it, he still dreamt of getting a job and supporting us. His dreams started coming true when he got a chance to go to Orissa to learn carpentry 2 months ago. But we came to know he is a heart patient. Doctors tell he has been having cardiac problems since he was a child, but we had no clue. Now, his heart has become very weak. If he doesn’t get a surgery soon, we have to watch him die,” - Mamtaj, 20-year-old Morshed’s mother.

After both his parents had to stop working, they didn’t even have the money to eat

Morshed's father, Malek used to work as a mason. They almost had no family income after Malek suffered severe injuries in his waist almost 2 years ago. After Mamtaj’s vision started blurring, even she had to stop her embroidery work. After marrying off their elder son and daughter, the poor couple didn’t know how to run the family. The little savings that they had made was gone. 2 square meals became a luxury for them. After Morshed finally managed to find work in Orrisa, Mamtaj and Malek felt a little relieved.

After learning carpentry, Morshed took up carpentry work going on in a hospital in Orissa. 2 months ago, Mamtaj who was eagerly waiting to hear from her son in Orissa, got a call. It wasn't from Morshed as she expected, it was a doctor from the hospital where Morshed was working. He said "Your son isn't doing well. His heart is very weak and he needs a surgery as soon as possible". Mamtaj couldn't believe what she heard. The hospital where Morshed worked for had organized a health check-up for the workers. Morshed was given a checkup as well. When the results came, doctors found out that he has a failing heart.

Morshed is suffering from a rheumatic heart disease, a condition in which one or more of the valves are damaged. He needs to undergo a surgery to stay alive. Morshed has been suffering from this condition since his childhood but it was never diagnosed.


“As a child, when he would come back after playing, we could sometimes hear his heart pounding too rapidly. Sometimes he would say he had difficulty in breathing. We had never doubted that it would due to a weak heart. We had no idea that his heart was gradually giving up on him. When he was diagnosed, it was already too late. Doctors had given us the date for his surgery in the last month, but we couldn’t do it. This time he cannot miss it. This surgery is my last hope to save my son.” Mamtaj

The family was already in debt, now they have nothing left to pay for his treatment

For the past 2 years, Mamtaj and Malek’s life has been very difficult. Neither of them has any income. On some days, when Malek manages to get some work, he would earn Rs 50. The family has been in debt for all these years. Now for Morshed, they had to borrow Rs 1 lakh in just 2 months. Arranging another Rs 3.1 lakhs is not even close to possible for the poor family.

My son never questions anything. He always understands and tries to adjust to the situations.  Every time when he tells me, ‘you shouldn’t cry much if I die,’ my heart rips apart. I don’t know why is God punishing my child. He has become so weak and looks so pale. I am scared to look into his eyes.”- Malek

20-year-old Morshed is suffering from a heart disease and he needs a surgery to stay alive. The boy who had left home with the dream to support his poor parents is now on the verge of losing his life. Your help will save Morshed's life.

Your support will help this young man’s heart to keep breathing. 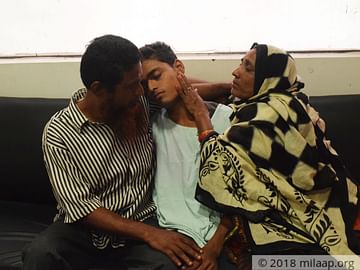 Morshed couldn't get a surgery once due to poverty, now he is running out of time

UPI: givetomalekmir@yesbankltd (Copy to clipboard)
Or
Click here to read the instructions before you make a bank transfer.