Only A Few Days Are Left For This 12-Year-Old To Get A Life-Saving Spinal Cord Surgery | Milaap
loans added to your basket
Total : 0
Pay Now

“Whenever we touch his neck, Shahnawaz howls in pain. His neck isn't shaped straight like us. It’s a terrible sight to see our son in such a bad condition. He can’t even eat his own food or walk to the bathroom by himself. Shahnawaz asks me why is he not like his siblings - why can't he sit a moment without pain. He has very little time to get a surgery and I don't know if I'll be able to save him,” Naphis, Shahnawaz’s father.

Naphis and Sara had noticed that Shahnawaz had an abnormal body posture since he was 2 years.  But they didn’t have the money to go out of the city to take him to better doctors for a long time.

“After arranging the funds for years, I finally managed to take him to a good hospital. What we thought to be just pain due to bad posture, was something worse. Unlike normal people, his spine is curved sideways. I haven't seen anything like this in life. He loved playing very much. I wish I had stopped him from playing much. Maybe, that could have kept him better.”

Shahnawaz has scoliosis, a condition in which the curve of the spinal cord is sideways. To add to this, he also has a recurring lung infection. If his lung infection doesn't get better soon, a part of his lungs might have to be removed. The infection is spreading very fast and the condition of his spine is deteriorating rapidly.

“I don’t understand what will lessen his pain. If we lay him on the bed, he cries in pain. If we try to make him sit on the floor, he cries in pain. Sometimes he is in so much pain that he becomes blue and the nerves of his body get pulled. I want to release my son of so much pain. I want him to do everything that a child of his age is capable of doing. I want him to live.”

Naphis has always wanted to send his kids to school. Young Shahnawaz has never seen a school because of his problem. He wants to go to school and run about like other children his age, but that has not happened yet. His parents have been educating him at home all this while.

“My wife, Sara wanted to come with us from Allahabad. I couldn’t bring her with me. I am staying in the hospital and somehow managing a way to find food. I didn’t want Sara to suffer when I can manage everything alone. She cries to me every day on call and I don’t find a word to console her. I don’t even know if I can bring her son back alive.”

This farmer with irregular income cannot afford to help his son

Naphis is a small farmer in Allahabad. He doesn’t even have a farm of his own. He manages to bring home the crops that he cultivates. Sometimes Naphis sells from his own stock to get a little money for other needs. He doesn’t even know what will happen if no one helps him.

“If I had money, I wouldn’t have worried about a thing. I couldn’t get him treated only because I had no money. But now things have become worse. He’s running out of time and every day seems to be a battle. I want to win this battle and take my son home alive.”

12-year-old Shahnawaz has scoliosis, a defect in the spinal cord. If he doesn't get this surgery done soon, his lungs can be damaged badly and can kill him. The cost required to save him now is Rs 9.1 lakhs and his father is in no position to afford his treatment. 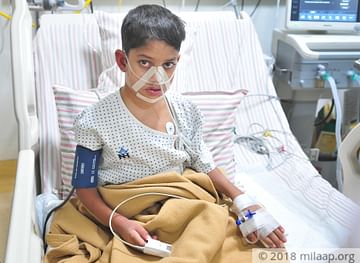 Shahnawaz has a bent spine and lung infection. Without urgent surgery, he might not live.

UPI: rzpy.givetomlpmohammed017@hdfcbank (Copy to clipboard)
Or
Click here to read the instructions before you make a bank transfer.