Cancer Has Brought This Active Teenager's Life To A Standstill, Only Urgent Treatment Can Save Him | Milaap
loans added to your basket
Total : 0
Pay Now

Cancer Has Brought This Active Teenager's Life To A Standstill, Only Urgent Treatment Can Save Him

“Miraj is really fond of playing carom. Every evening as soon as he finished his studies, he would join the neighbourhood kids in their game of carom. Now his weakness doesn’t allow him to get up from his bed. He leans on his pillow and peers outside the window watching all his friends enjoy. Cancer has brought my son’s life to a standstill. He is just 14-years-old and I feel very scared thinking if we can’t afford the treatment we might lose him.” -Toslema Bibi, mother.

Miraj has been diagnosed with T Cell Lymphoblastic Lymphoma. In this disease, the white blood cells (lymphocytes) present in the lymph nodes or thymus gland grow abnormally and build up in the body. The doctors have told Toslema and her husband, Moju Khan that only continued chemotherapy sessions can save their son.

“One evening after returning from school, Miraj complained of a severe stomach ache and was running a high temperature. Nothing we did made him feel any better so we decided to take him to the hospital. When the test results came out, I could not believe what the doctors told us. It took me months to come to terms with the fact that my son has cancer.”

Always a bright student, Miraj now misses going to school as he lies down in his bed, sick and tired

Miraj loved studying and has always topped his class. He used to bring books from the library and spend nights reading them. But the sudden onset of cancer turned his life upside down. All that he can do now is lie down in his bed. He gets a severe headache when he tries to read books. Doctors have started with his chemotherapy but the treatment is taking a toll on his health. He vomits out everything that he eats - even if he drinks water, he throws that up.

“As he lies down in the hospital bed, he keeps asking me when he can get back home and join his friends. I don’t know what to tell him. Once while we were in the hospital my mother-in-law called us to say that Miraj has won a state-level writing competition. I saw him smiling after so long when he heard the news. With tears in my eyes, I prayed to God that he gets well soon and I can take him back home.”

Moju and Toslema stay in a small village in West Midnapore district of West Bengal. Moju is a daily wager who does welding works. On days that he gets work, he makes around Rs 500-600. He is the only earning member and his other kids (Marjina, 4 and Riyaj, 8) and old parents are dependent on him.

Seeing that Miraj was not getting any better, the doctors had advised the parents to take him to Chennai. The couple has been staying in Chennai for the last five months and they need to stay longer for Miraj to get better. They have rented out a small place near the hospital and have already spent about Rs 10 lakhs borrowing from their near relatives. Now they have utilized all their savings but are still short of money to continue their son’s treatment. They need another 15 lakhs to get Miraj treated but Moju and Toslema won’t be able to arrange for the money without help.

14-years-old Miraj is suffering from cancer and the only way he will get any better is through chemotherapy. His parents have exhausted all their savings and are in no condition to continue his treatment. Your generous contribution can bring back hope in Miraj’s life.

Your support can save Miraj's life 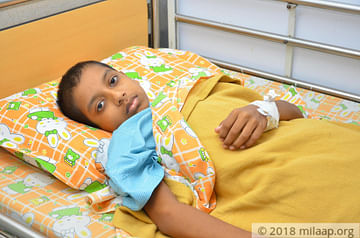 Cancer Is Making This 14-Years-Old Weaker By The Day, He Needs Urgent Treatment

Miraj wants to go back to his normal life but he is very sick and needs chemotherapy.