Shares
Shares
Share on whatsapp
As other children in his class play cricket after school, Sowrava sits by the boundaries, watching quietly. His friends then help him get back home, carrying his backpack for him and patiently waiting for him to catch up. Sowrava has never had a normal childhood due to his deformed spine, but over the past two years, his condition is only deteriorating. He can’t walk long distances or sit in a place for long. He’s endured so much pain since birth, and now it’s like he’s almost given up. But there’s hope for Sowrava – an urgent surgery can help him get better. However, despite his mother Sumitra’s best efforts, she can’t afford to save him.

“I work the night shift as a security guard for the metro, so that I can look after Sowrava during the day. He goes to school on some days, and on other days, he’s too weak to move. He’s 16 but he’s only in class 8 because he’s missed a school a lot owing to his ill health. The past two years have been so difficult. With each day, his condition is getting worse.” – Sumitra, mother

After the untimely death of his older brother, Sowrava’s condition began deteriorating

Sowrava has Kyphoscoliosis, a deformity of the spine characterized by abnormal curvature of the vertebral column that only got worse with age. Despite his deformed spine, Sowrava remained happy for most of his childhood because of his older brother Sanjay. Unfortunately, Sanjay tragically passed two years ago in a road accident, leaving Sowrava and his parents devastated. That day marked the beginning of some of their darkest days. Ever since then, Sowrava’s deformity has only increased, leaving him weak and in severe pain. If not treated in time, his condition will deteriorate beyond repair.


“One day after my older son passed away, Sowrava said to me ‘I wish I had died instead of my brother’ He misses him so much, we all do. I know that if my older son was alive, I wouldn’t be struggling so much. We could’ve found a way to afford the surgery.” - Sumitra

Sumitra works at the Nayandahalli, Bangalore metro station as a security guard, and as the sole breadwinner of the family. She takes care of her son and her ill husband, Ramappa, who’s health doesn’t allow him to continue his work as a daily wager anymore. He has now moved to their village to recuperate. Sumitra is single-handedly struggling to manage Sowrava’s treatment. She works hard every day, and has done everything in her power despite all the hurdles, but now she can’t do it on her own. Sumitra needs your help to save her only living son.

Sumitra now feels more helpless than ever. The one surgery that can save her son from pain and trauma, is above and beyond what she can afford. Despite her best efforts, Sumitra is falling short. All she wants is for Sowrava to be happy again. With surgery, Sowrava can survive this severe, painful deformity.

Your support will save Sowrava’s life. 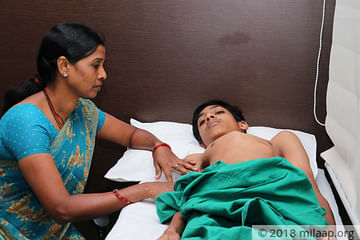 She's Single-Handedly Trying To Save Her Son's Life, But She's Falling Short

Sowrava needs an urgent surgery to survive, but his mother is helpless. You can help save him.