15-Year-Old Has One Last Hurdle To Cross Before He Can Beat Cancer And Go To School Again | Milaap
loans added to your basket
Total : 0
Pay Now

Shares
Shares
Share on whatsapp
Abhijeet was a meek boy who was loved and admired by everyone in his neighborhood for his calm demeanor. “He’d never raised his voice with anybody, my boy. He had a way of dealing with people that even his teachers found extraordinary. He’d not even fight with his little sister like other brothers. He was so mature even from a young age,” says his mother Suvarna.  But this was before cancer came into his life around two years ago, in June 2017.

Cancer made this young boy weak and sullen – he would go days without speaking to his own parents and sister Akansha. The excruciating rounds of chemotherapy not only made his hair fall, it wiped the smile off his face. But when he was declared cancer-free in early 2018, there was renewed hope. He was gearing up to go back to school when cancer came back to plague him. But with God’s grace, he underwent a bone marrow transplant recently to get completely cured of the condition. However, he still needs to be in the hospital for recovery and his parents have no money to continue his treatment.

‘I want to see my friends again, play cricket again…will I be able to do that?’

Abhijeet kept to himself mostly during the course of his treatment, but in some rare moments where he would be alone with his mother, he would ask her if he will be ‘normal’ again. “The only two things that are really really important to Abhijeet are cricket and his studies. He really knew how to balance the two well. But it has been over two years since he’s gone to school or met any of his friends. He’s not swung his cricket bat for ages now. Somehow, he doubts if he would ever be able to be the old Abhijeet again,” adds Suvarna.

Adding to his troubles, he has completely stopped eating as well. “Tears fill my eyes when I remember the old times – where he used to love food so much. He would always be behind me in the kitchen saying, ‘Ma, can you make that for me, can you make this for me’. Now, I have to plead with him to eat at least a spoon of rice.”

Abhijeet’s transplant is over, but it’s not the final hurdle in his road of recovery

It was with great difficulty that Abhijee’s father Dattatray, a small farmer in Pune, arranged some money for his transplant – he had to beg his relatives, friends and even strangers to help him save his son.  But Abhijeet still needs to spend some more days in the hospital – doctors will have to monitor him to know if the transplant has been a success or not. He is also prone to many diseases at this point and needs constant care in addition to 6 months of expensive medication. Dattatray earns only around Rs 4000 a month at best and does not have the means to save his son.

Even a small contribution you make to this youngster’s cause puts him one step ahead of recovery. Abhijeet has been boldly fighting cancer for so long. He has embraced the ups and downs of the journey so far gracefully and is looking forward to going back to school and fulfiling his dreams.

You can help these parents save their loving child 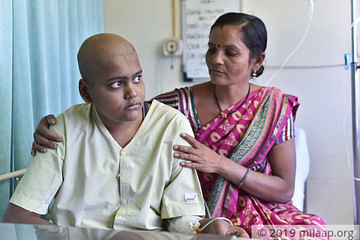 He's been fighting bravely all along, needs a little more help to win this battle

This 15-year-old boy dreams of going back to school and playing cricket again. Please help.