A Liver Transplant Is The Only Way To Cure This Teenager Of A Rare Disease He Has Been Fighting Since Birth | Milaap
loans added to your basket
Total : 0
Pay Now

KC
You are sending a message to
Krishna Chaitanya
Go back

Shares
Shares
Share on whatsapp
Tejeswar is in class 7 and he loves to play kabaddi (contact team sport). This year, all he has been thinking of was to be a part of his school kabaddi team but unfortunately, his health never supported him. He hasn’t been able to go to school regularly because he is suffering from a rare disorder that causes high levels of bilirubin in the blood. His liver hasn’t grown completely and he has been suffering from jaundice. Even the medicines that he has been taking has not helped him to get better. His only hope to get better is through a liver transplant but his family is in no condition to afford it.

“My boy is 14 now but he has never had a normal childhood. The disease has always been there in his life, stopping him from doing all those things that children his age do. He looks longingly at the street food but doesn’t dare to taste them. He knows he is sick but he wants to get better. His smiling face and determination to get well scares me at times - what if I fail him as a father?” - Sivananda, father.

A poor farmer by profession, Sivananda is struggling to afford the treatment

Sivananda is a farmer in Anantapur, Andhra Pradesh. He is solely dependent on the rain for a good harvest. He has already spent about Rs 7 lakhs after borrowing from friends. He is now in huge debt and without help, he won't be able to cure his son.

“Rajeswari (wife) and Shamukha (daughter) ask me everyday if I have thought of any plans to arrange for the transplant. I try to give them hope but my eyes can’t lie anymore.They know I am trying my best but I know that is not enough.”

Sivananda is cowering down under the weight of the debt. He has gone from pillar to post to seek help for his son, but in vain. Rajeswari is willing to be the donor but their lack of money is coming in their way. However, a little help from your side can make things so much better for this teenager and his entire family. Your support will help him get a new and healthy life and bring the smiles on his dear ones’ face.

Let's help Tejeswar get a healthy and happy life 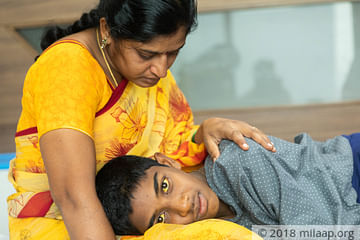 This Teenager Suffering From Rare Disease Needs Transplant To Live