3-Year-Old’s Rare Disease Can Take Away His Sight And Life Without Urgent Transplant | Milaap
loans added to your basket
Total : 0
Pay Now

“When he was 6-months-old, we tried to make him smile. But our son just stared at us blankly. It was only months later, that he smiled for the first time. We knew then that our son was not like other children his age. He took longer to walk, talk and understand what we were saying, but then, the shape of his head started changing and his forehead started becoming prominent. That was when we found out he has a rare, dangerous disease. Now, every time he lies down, he struggles to breathe. He’s always restless and in so much discomfort and pain. The symptoms are only getting worse with time. He doesn’t have long to live without a bone marrow transplant.” – Aparna, Manchala Madhuram Sai’s mother.

Every time little Manchala Madhuram (fondly called Madhu at home) refused to eat or didn’t respond, Aparna and Srirama thought he was just being stubborn like other children. Little did they realize that their son was fighting a rare disease that will shorten his life-span considerably without an urgent bone marrow transplant.

The diagnosis changed their lives, but there’s hope – the little one can survive with a bone marrow transplant

For the past two years, this 3-year-old has been in and out of hospitals. What Aparna and Srirama initially thought were developmental delays, was soon diagnosed as Alpha Mannosidosis – a rare inherited disorder that not only affects physical growth and development but also affects the intellectual development of the child. The disorder is dangerously progressive and shortens the lifespan of the child considerably.


“Sometimes, I can’t help but blame myself for what our son is going through. It’s a genetic disorder, I wish I had got tested when I was pregnant. My older son grew up normally, so I never imagined something like this would happen. All this time I thought he was just a little ‘slow’. When the doctor told us about his diagnosis, I didn’t have the strength to even react. But there’s hope. We were told that his condition has been detected in the early stages, and if he gets a bone marrow transplant now, he will survive.”

However, if Aparna and Srirama delay his treatment any longer, Madhu risks developing more severe symptoms like blindness and deafness. He needs the bone marrow transplant before the symptoms become irreversible.

His father works all night to try and afford his treatment, but it’s not enough

Srirama wakes up every morning with only one thing on his mind – to somehow find a way to afford his son’s bone marrow transplant. He works for a private company and leaves for work in the early hours of the day and returns home late. On some days, he even works all night to try and make extra money. However, Madhu’s bone marrow transplant is still out of their reach.


“We’ve spent nearly 3 lakhs on his treatment so far, all of it from our savings. My husband hardly earns 8,000 a month. The only thing that’s standing in the way of our son’s recovery is our financial condition. If he doesn’t get treated in time, his condition will only worsen and then there will be no turning back. It’s now or never for our son, and we’re desperate to save him.”

Manchala Madhuram Sai needs an urgent bone marrow transplant to survive the rare and dangerous disease that will slowly kill him. Aparna and Srirama are running out of time to get him the life-saving transplant and find themselves at a dead-end. With no one to turn to and little time and money left, they need your help to save their youngest and give him a chance for a healthy, bright future.

Your support will save Manchala Madhuram’s life. 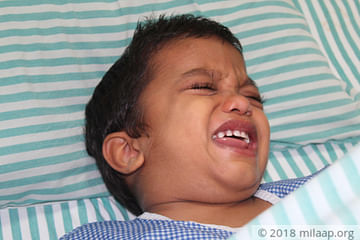 He needs an urgent bone marrow transplant to survive this rare disease. He needs your help to live.

UPI: givetoaparnaa@yesbankltd (Copy to clipboard)
Or
Click here to read the instructions before you make a bank transfer.