This Teenager Has Lost Ability To Walk And Speak Due To 100% Damaged Liver, Needs Urgent Transplant | Milaap
loans added to your basket
Total : 0
Pay Now

This Teenager Has Lost Ability To Walk And Speak Due To 100% Damaged Liver, Needs Urgent Transplant

“I still remember how proudly Mahesh used to say that he would serve his country as an army officer one day. Now he is not in a position to even walk the short distance from his bed to the washroom. He is completely dependent on me for every small activity – he cannot even scratch his back on his own. He cannot even speak properly anymore. All he does is lie in bed all day, waiting for his ordeal to end.”-Geetha, mother of 15-year-old Mahesh.

Mahesh was an active teenager who would help his mother with household chores and his father with buying monthly ration for the family with equal fervour. Whenever he was asked to do something, he would never say ‘no’. He was always brimming with positivity – there was always a smile on his face and he was loved by the people in his small village in Palakkad, Kerala for the same reason. But now, he is a poor shadow of his old self. Liver failure has taken his energy and vigour away, and now it threatens to take his life. His father, Manikandan, a poor daily wage labourer, cannot afford to get him the urgent liver transplant he needs to survive.

On that fateful day two years back, Mahesh had been preparing to go to play with his friends after coming back from school when he felt a sharp pain in his legs and arms. Over the next few hours, his limbs started swelling. And over the next few days, he developed fever and was in so much pain that he had to stop going to school. When his worried parents took him to a good hospital in Kozhikode, they were shocked when he was diagnosed with Wilson’s disease, an inherited disease that causes abnormally high amounts of copper to accumulate in soft organs like liver and brain. He was immediately started on medicines and the disease was in control until it became worse from the past 2 months, now resulting in complete liver failure.


Mahesh, before he got so sick

“We believed that he would be fine because he had resumed going to school and did not complain of any discomfort until recently. To our horror, the same symptoms – swollen limbs and fever – came back with greater force. We were dumbfounded when the doctors told us that and that he had developed jaundice and that his liver was completely damaged by copper deposition.”-Manikandan, father.

Mahesh's legs have become motionless due to the severe nerve damage caused by Wilson’s disease. Not only that, he has lost the ability to speak coherently and swallow food properly. He can only say a few words like ‘Acha’ (father) and ‘Amma’ (mother) now. His liver is a 100% damaged and doctors have clearly told his family that he might even lose his life if he does not get a transplant soon. Mahesh is very weak now, but he is not scared of the future. When his mother cries sometimes due to the fear of losing him, he keeps his hand on her shoulder and tries to smile, even though it is difficult to move the muscles on his face too.

“When he is hungry, he points to his mouth now. He tries hard to speak in full sentences, but fails every time. We have been taking good care of him – by preparing special low-salt and low-spice dishes and giving him his medicines on time – but we know very well that that is not enough to keep him alive for long. We are just praying that nothing bad happens to him before we arrange the money for his transplant,”-Geetha

A poor daily wage labourer who has been jobless for months now, Manikandan cannot afford to save his son

Ever since Mahesh’s condition worsened, Manikandan has not been able to go to work. Earlier, he used to be a daily wager at a construction site in Palakkad and earn a maximum of Rs 400 a day. He was able to pay for Mahesh’s initial rounds of treatment by borrowing heavily from the people in his village. From the past 1 month, Manikandan has been struggling to arrange enough funds for the transplant, but in vain. He had to rent out a small room near the hospital (which is in another district) for Mahesh to go for regular check-ups using the last paisa he had borrowed. Now, all that money is exhausted and he does not have anyone else to turn to for help.

Mahesh was an enthusiastic teenager who dreamed of joining the military one day to make his family and nation proud. But today his severe liver disease has debilitated him so much that he cannot walk or speak properly. Without an urgent liver transplant that his poor father cannot afford, he will not survive.

Your kind contribution can save this teenager’s life 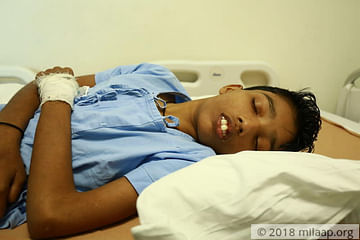