This 5-Year-Old Aches To Laugh And Play, But His Heart Disease Won't Let Him | Milaap

This 5-Year-Old Aches To Laugh And Play, But His Heart Disease Won't Let Him 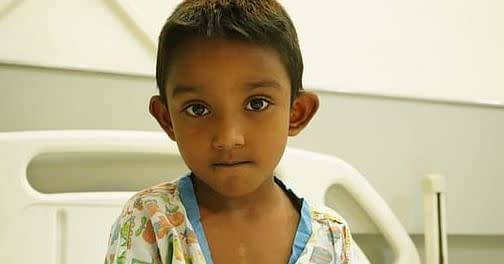 Share
5-Year-old Krishanth attempts to talk, but nobody other than his parents understand him. He sees his friends screaming and laughing, and wonders how they do that. Late to reach all his milestones, he was 3 by the time he could finally start walking. Deadly heart disease has slowed down his life and is imposing unfair limitations on this little boy and his childhood.
He can’t walk without resting. He doesn’t know what it feels like to run around. He’s never been to school. He can’t play, cycle, laugh or even cry in peace, without his body turning blue! And now, without urgent cardiac surgery, he can't survive.

Only a baby when diagnosed with deadly heart disease

7 months after he took his first breath, he weighed no more than 4 kgs. He was weak and didn’t have the strength to even drink milk.

“He had gained only 1.5 kgs since birth. He would gasp for breath and struggle to suckle, even after 7 months. When we took him to the hospital, they ran tests, and told us something we never dreamed of! His heart’s condition was poor. There was a hole in his heart, and a missing valve. He needed two open-heart surgeries, to just survive…” – Muralidharan, father.

An open-heart surgery followed the diagnosis, saving the follow-up surgery for when he’s a few years older. Although he was out of immediate risk, the boy was still suffering.

“He was alive, in name only. There was nothing he could do, other than stare at those who were living the life he ached to live. Sometimes, he was determined to play, come what may. He’d run a few steps to where the boys played, and collapse. He wouldn’t have the strength to even get up. We’d carry him back home. He has to eat slowly. Else, he’ll choke, and turn blue! Sometimes, he aches to tell us something. But he struggles to talk, between gasps of breath. Then he starts sweating, and simply lies down…” – Rajasarmila, mother, breaks down.

He's running out of time, only urgent cardiac surgery can save him

For over a year now, the parents have been struggling to afford their son’s follow-up surgery. But it cannot be postponed any longer.

A bricklayer, Muralidharan is struggling to afford 10 lakh rupees

A daily-wage labourer, Muralidharan earns no more than Rs. 8,000 a month. Over the last few years, he’s spent most of his income on little Krishanth’s medicines and check-ups. With the pandemic, there’s been lesser work than usual, and the family is struggling to get by. The surgery costs 10 lakh rupees, and the parents are in desperate need of your support.


This little boy has had his fair share of misery. He deserves to lead a happy life. You can help him! Click here to contribute.
MK
Patient M. Krishanth is 5 years old, living in Tirunelveli, Tamil Nadu
AC
Being treated in Apollo children's hospital, Chennai, Tamil Nadu