Poverty-Stricken Security Guard Can’t Save His 13-Year-Old From A Deadly Form Of Cancer | Milaap
loans added to your basket
Total : 0
Pay Now

"My son cannot walk now. It was just a month ago that he was running around, playing cricket. Today, I don't know If I can save my son. His cancer has spread so rapidly. When he came to know he has cancer, he said he will fight it. Like how his favourite cricker Yuvaraj Singh fought cancer. Without treatment, he will die. How do I tell him that we are struggling to afford the transplant, that his parents have nothing left to save him."

After being down with fever for days, Lohith’s right leg started hurting and he became terribly weak. On getting multiple tests done, Manjunath was so frightened when he found out that Lohith was actually suffering from a deadly form of blood cancer known as chronic myeloid leukemia. In just a month, this disease has made Lohith extremely anaemic and if left untreated, there are high chances of it spreading and severely damaging his other vital organs.

“His right leg was hurting so bad that he couldn’t even stand. I took him to the hospital thinking that he just had a fever but doctors told that he has blood cancer. Right now, he is just throwing up everything he eats and he has lost weight too. I’ve never seen him so weak before.” – Manjunath

The 13-year-old’s condition had become so critical that he had to start his chemotherapy immediately. In addition to this, after chemotherapy, Lohith also needs a bone marrow transplant.

“He feels so sad and depressed because he has just been at home. The only time he goes outside is when we’re going to the hospital. He’s a very smart student too, and he hasn’t even seen any of his friends lately. Seeing him so weak and sad has left my wife, Sakamma, extremely depressed too. I have never seen her cry so much in my entire life.” – Manjunath

“I work as a security guard and I just earn Rs. 12,000 every month. With this, I have to take of my family of four. We are barely able to save anything. We live 3 hours away from the hospital and just our journey to the hospital and back costs us Rs. 2000. We can’t go by bus all the way because Lohith feels too weak and doesn’t have the strength to stand or walk. We have to go to the hospital twice every week for chemotherapy. After working so hard for years, I had managed to save a little, but everything is gone now. I can’t even afford an additional week of chemotherapy, let alone the bone marrow transplant.” – Manjunath

Manjunath is so poor that right now, he doesn't even have enough to afford their journey to and back from the hospital. He is running out of time to provide for the additional treatment Lohith needs. After borrowing from friends and relatives, he had spent over Rs. 1.5 lakhs for his treatment. But, Lohith simply can’t survive without additional chemotherapy and a bone marrow transplant which costs around Rs. 42 lakhs.

13-year-old Lohith hopes to go home, go back to school with his friends, and play cricket. These few weeks of treatment and the transplant will decide his fate. His mother and father are scared they will lose him. With immediate support, this boy has a chance to live.

Your support will save 13-year-old Lohith and will ensure that he is able to go to school and play cricket again. 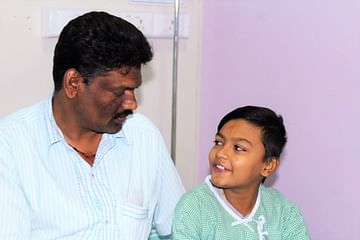 Cancer Has Consumed Lohith's Life And Will Kill Without Treatment

UPI: rzpy.givetomlplohithgo001@hdfcbank (Copy to clipboard)
Or
Click here to read the instructions before you make a bank transfer.