Helpless Mother Has Nothing Left To Save Her 8-Year-Old Who’s Fighting For His Life Every Day | Milaap
loans added to your basket
Total : 0
Pay Now

Shares
Shares
Share on whatsapp
As Anusuya sits by little Likith’s hospital bad, she tries to remember the last time she saw her son smile. She’s immediately taken back to when he was just a baby, a few months before he was diagnosed with a deadly blood disease. She remembers his happy giggles as she held him in her arms and tickled him, and remembers how he would try to turn on his own. That was the happiest and healthiest Likith has ever been, and it was all Anusuya had hope for his future as well. However, the chance of a happy childhood was stolen from the 8-year-old even before he could say his first words.

“He’s not had a normal life since he was a 6-month-old baby. I think it was the last time I saw him laugh and play. Now, while other children play, our Likith is in the hospital. He's just become so weak. So far his entire childhood has been spent between home and hospital. Every other week when we pass by the park, Likith just longingly watches the children there and says ‘amma shall I also go and play?’ and as much as it hurts me, I have to say no. His disease is only making him weaker by the day." - Anusuya, mother

Anusuya and Manjesh's prayers were answered when Likith was born. They promised to work hard and had many plans for their baby's future. But when Likith was 6 months old, he suffered a high fever and despite taking medicines his health only deteriorated. When he was taken to a private hospital he was diagnosed with Thalassemia major, a blood disease in which the body makes an abnormal form or inadequate amount of hemoglobin. Ever since then, his life has changed and he was undergoing a blood transfusion once a month.

At an age when he should be playing and learning, Likith is fighting for his life every step of the way

When he was 8-year-old, his stomach started swelling and slowly his whole body too. His parents rushed him to the hospital and doctors said that his spleen was affected to excess iron and it has to be removed at the earliest to save his life. Now he lives without an organ in his body which increases the risk of severe infections because of weak immunity. He is in a helpless situation. If the transfusions are stopped, he will not survive the disease, but if he continues with it, his other vital organs will be affected. This poor kid waits for the permanent solution- a transplant, that his parents cannot afford.

"At times, he hugs me tightly and cries out loudly saying ‘why can’t I play happily like others?’ and there's nothing I can say to make him feel better. I know the only thing that can save him, is far more than we can afford. He's too young to understand why he can't be like other children. All I want is for him to be healthy and have a normal life, I just want my son to survive this disease.” - Anusuya.

Despite selling the only piece of land they ever owned, this family is unable to save their son

Manjesh is a daily wage laborer who works on a farm. He barely earns Rs 250 per day, whereas daily medication costs around Rs 500 a day. With a family of five to feed and intense medication for one child, this couple is overwhelmed with the expense of the surgery. They have sold the only piece of land they ever had. They have spent all their savings and have also borrowed money from their relatives. They have spent 10 lakhs until now. They have exhausted all the money and cannot save their son from this dreadful disease. The life-saving transplant will cost 35 lakhs which is beyond their means.

This 8-year-old is battling for life every day since childhood. He is suffering from a severe form of blood disease and is prone to infections. He is living on blood transfusion which can turn fatal with excess iron content. He needs an urgent bone marrow transplant to survive. The poor parents have nothing left to save their son.

Your kind contribution can save little Likith 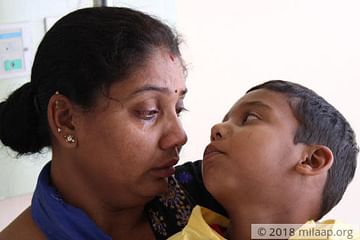 Mother is striving to save her son from fatal disease

Every minute is very crucial to 8-year-old, only urgent transplant can save him

UPI: givetomanjesh@yesbankltd (Copy to clipboard)
Or
Click here to read the instructions before you make a bank transfer.