He Wants To Graduate And Save His Parents, But Now They Are Scrambling To Save Him | Milaap
loans added to your basket
Total : 0
Pay Now

You are sending a message to
Chandra Sekar
Go back

He Wants To Graduate And Save His Parents, But Now They Are Scrambling To Save Him

“He got his board exam results that day. He was planning a future. The same day, we got his blood test report. It told us he may not have a future.” – Pushpam

Nearly 60, Kevin’s father is working as a housekeeper to support his family. Kevin has seen him stumble out of bed, struggle to get ready and shuffle to work every day for the past two decades. All he wanted was to study hard, be an engineer, land a good job, and take care of his parents. Just when he got one step closer to that dream, he was handed with a death sentence.

‘He was screaming in pain from those lumps’

In 2016, Kevin felt a lump on his neck. It did not hurt at the time, but soon it spread to his armpits, hands, legs and groin. The pain was debilitating. It was a result of Rosai Dorfman disease. His lymph nodes swell up because there is an overproduction of white blood cells.

“It is like cancer, but worse. It moves fast. It is incredibly painful. It can quickly damage his organs and cause tumors.” - Gnanasekar

Kevin wrote his exams during chemotherapy

Kevin needed multiple cycles of chemotherapy. He settled for a BA instead of a B.Tech, and joined a college close to home in Tiruppur. He would go to chemotherapy, come back home, and straight to class on some days.

“The lumps come and go. The pain is always there. Still, this did not stop him from writing his exams. Today, Kevin is in his final year of college. There are days he cannot even get up from his bed, but he insists on it. I tell him that it is okay to skip a year. He is more worried that he would not be able to get a job and support us.” - Pushpam

Kevin grew up watching his parents struggle to afford meals, he knows the transplant is beyond their means

Even after chemotherapy, Kevin’s condition is deteriorating. He is extremely tired and almost bedridden, barely able to walk. Kevin now needs a bone marrow transplant to survive. His father Gnanasekar is a housekeeper and earns Rs 6000 per month. He pays Kevin’s college fee, house rent, grocery bills, and has nothing left at the end of the month.

Your support can give Kevin a new life

“There have been times I have borrowed from my relatives so we can have food. The chemotherapy was hard to fund. My daughter and son-in-law sold jewels to help us. Nobody is in a position to help us this time.” - Gnanasekar

Kevin dreams of buying a house for his parents. He wanted his father to quit his job as they have struggled enough. He was close to changing their life when this disease robbed him of the dream.

He is losing faith and wonders if he could ever survive this disease. Your contribution can not only save Kevin’s life, but also save his family. 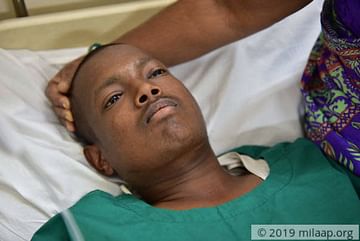 All His Dreams Are At A Standstill Because Of His Disease

His parents have always struggled hard, he fears that he'll not be able to give them back.