A Growing Cancerous Tumour Has Stalled This Bright Teenager’s Dreams, He Needs Your Help | Milaap
loans added to your basket
Total : 0
Pay Now

A Growing Cancerous Tumour Has Stalled This Bright Teenager’s Dreams, He Needs Your Help

Shares
Shares
Share on whatsapp
Jayanthu, a teenager from a small village near Chikballapur, dreams big. He wants to become an engineer one day. He sees actors in movies working on laptops, and one day he too wants to own one. Jayanthu wants to make it in the big city, the ‘Silicon Valley of India’ – Bangalore. Little did he ever imagine that his first time in the city wouldn’t be to go to college or his first job, but to get painful chemotherapy for the growing cancerous tumour in his leg.

Two months ago, a small fall led to a grave diagnosis

It was like any other day. Jayanthu was walking back home from school with his friends when they decided to race each other back home. A few meters away from home, he slipped and fell. He quickly got up and continued to run. Jayanthu won the race that day, but it was the beginning of his fight with cancer.

“He came back home limping that day. When we asked him he said it’s nothing, and he had fallen while playing. He played a lot with his friends, and coming back home with a small cut or bruise was normal. But this time it was different. His leg didn’t get better. Instead, his knee started swelling,” – Varalakshmi, mother

Jayanthu was taken to Bangalore for tests and scans, and he was diagnosed with osteosarcoma, cancer that starts in the bones.


Jayanthu before cancer took over his life

They sold the little jewellery they owned to start treatment, now they need your help

Varalakshmi and Rangaswamy didn’t think twice before selling the little jewellery they owned to start Jayanthu’s chemotherapy. They hardly got Rs. 40,000 for it. Now, they travel nearly 4 hours by bus every two weeks to take him to the city. The journey is difficult. Jayanthu vomits throughout and is exhausted by the end of it, but his parents don’t have the means to afford to live in the city for his treatment or continuing the chemotherapy itself.


The tumour in his knee is growing, he needs your help

“I work as a daily wager. Sometimes on others’ farms, sometimes in construction. It all depends on the work available for the day. I earn Rs. 250 a day, but on some days, I earn nothing. With this, I can hardly afford a meal now. My son’s treatment is more than I can manage.” – Rangaswamy, father

Jayanthu with his father on his 14th birthday

Jayanthu’s only wish is to live

When Jayanthu celebrated his 14th birthday in March last year, the only wish he made was that he passes class 8 with flying colours. Now all he wishes for is to go back home, to his friends, his school and most of all, to live. Jayanthu can now barely walk. Even when he tries to, he’s in excruciating pain. He doesn’t know he has cancer, but he senses the gravity of the situation. The tumour in his knee is growing. He needs continued chemotherapy, followed by a surgery to fight bone cancer. With your help, Jayanthu can get back on his feet again and reclaim his old life.

Together we can save Jayanthu from cancer 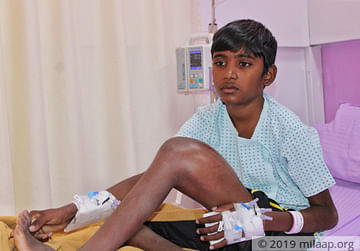 Jayanthu needs chemotherapy and a surgery to fight cancer, but his parents can't afford it.