Single Mother Struggles To Save Her 12-Year-Old From A Disease That Has Left Him Paralyzed | Milaap
loans added to your basket
Total : 0
Pay Now

Shares
Shares
Share on whatsapp
As Naseem Banu waited for Husnain to return from school, she felt a sense of worry wash over her. She waited by the door, restless. Just as she was about to call his school, she saw the school rickshaw driver, running towards her, carrying Husnain in his arms. He told her that Husnain complained of sudden numbness in his legs and couldn't even get down from the auto. Husnain looked scared and helpless, and all he kept repeating was “ammi I can’t move my legs, I can’t move them at all!” Naseem rushed him to the hospital close by, and before they could start his treatment, he had lost movement in his arms. Ever since that fateful day, young Husnain has been in the ICU on ventilator support, unable to move or speak.


“Every time I go inside the ICU, I call out his name with the hope that he will respond. Sometimes, he opens his eyes slightly to look at me, but never more than that. It’s been ten days since my son hasn't been able to breathe on his own. His body is giving up on him, he's paralyzed and all I can do is watch. Ever since my husband left us three years ago, I’ve done everything to protect him. I can’t let him down now.” – Naseem Banu, Mother

Husnain loved playing sports and was extremely active, but the disease has left him completely motionless

Husnain has been diagnosed with Guillain-Barre syndrome, a rare disorder in which body’s immune system attacks the nerves. Weakness and tingling in the limbs are usually the first system and these sensations can quickly spread, eventually paralyzing the whole body. Once active and playful like most children his age, Husnain is now completely bedridden and unable to move. What started as weakness in his limbs, quickly spread to his hands and eventually, Husnain’s entire body.


“He loved playing football with his friends, and every day after school, he would drop his bags at home and rush out to play with them. It was his favourite time of the day, and he would come back and tell me all the things he did. Just hearing him speak so excitedly about it made me happy. Now there’s only silence. I don't know when he will go back to the childhood he had. The disease has consumed his entire body.”

Ever since her husband abandoned the family, Naseem has been struggling - she has no means to continue Husnain's treatment

Now, Naseem stays in the hospital all day, just waiting for her son recover from this deadly, degenerative disease. She has no income and has been relying on her father, a daily wager, for support ever since her husband left the family. Together, they borrowed money from relatives and took loans to start Husnain's treatment.

“For three years now, I’ve been taking care of my two children with my father’s support. My husband was the only one earning in the family, and when he left, I didn’t know what I was going to do. He hasn’t called or met the children even once since his second marriage, and Husnain rarely asks about him. It hasn’t been easy, but I’ve tried to do the best by them. But now I feel like I’ve failed. Watching my son lying so helpless on the bed breaks me every time. With no income, I can't keep him in the hospital for the next 3 weeks. My father has done all he could. Now I have no one to turn to.”

Husnain’s life before this deadly disease was a simple and content one. He was happy with his small family and loved going to school. He’s kind and considerate, but now his future his uncertain. The deadly disease has left him paralyzed, on ventilator support. Naseem Banu, a single mother, is struggling to save him with the help of her father, but his meagre income isn’t enough. Husnain needs your help to get treatment for the next 3 weeks to recover from this debilitating disease.

Your support will save Husnain’s life. 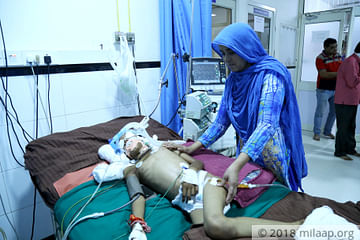 Husnain Loved Playing Sports And Was Extremely Active, But The Disease Has Left Him Completely Motionless

Husnain needs to stay in the ICU for longer to recover, but his mother can't save him.

UPI: rzpy.givetomlpmohhusna001@hdfcbank (Copy to clipboard)
Or
Click here to read the instructions before you make a bank transfer.