An Accidental Fall Has Left This 13-Year-Old With Damaged Organs, He Needs Urgent Help To Live | Milaap
loans added to your basket
Total : 0
Pay Now

An Accidental Fall Has Left This 13-Year-Old With Damaged Organs, He Needs Urgent Help To Live

"When I returned home on Friday, I found my wife numb in shock and my younger son Harsha Vardhan lying unconscious on her lap. He had a terrible fall from the third floor balcony. My wife was so overwhelmed with shock that she didn’t even think of taking him to the hospital. It was raining heavily that night and only after trying a lot we got an auto in which we took him to the hospital. He is fighting for his life now and we don’t have any means to save him” - Jayanna, father of Harsha Vardhan.

13-year-old Harsha was playing in his uncle’s apartment which was on the third floor. He was hardly paying any attention to the unguarded balcony while he was playing. Suddenly, he slipped from the edge and fell with a thud on the ground.

“I was working nearby and was about to reach home soon when few people from my neighbourhood came running to me. They said ‘Lakshmi, come fast, Harsha has fallen down from the balcony. He is unconscious.’ I did not know how to react to this, I followed them blindly. Harsha has always been mischievous but I had never thought that would bring him to the brink of death.” - Lakshmi Devi, mother.

Harsha had fallen down from a great height. But there was hardly much blood compared to his fall. He was however unconscious.

“It was so difficult to make Lakshmi understand that Harsha needs medical care. She kept on saying that he is not bleeding and there is no need for him to go to the hospital because Harsha is very scared of doctors and injections. After a lot of to and fro, we took him to the hospital in what seemed like the longest auto ride of our life. Harsha was having a hard time breathing and as I feared the worst, I wished we reached the hospital soon.” - Jayanna.

An old pic of Harsha with his father

Harsha’s injury was internal and he needed immediate surgery

When Harsha was brought into the hospital he needed immediate attention. He was suffering from internal bleeding from his spleen, his right arm was broken, there was a huge gash beneath his throat and his jaw was broken too. The doctors decided to fix his internal bleeding first or else the loss of blood would have killed him.

“I sat beside Harsha’s bed, holding his hand in my palm as my husband ran around making all arrangements for the blood. Very soon, he was taken to the operation theatre. As I waited outside the operation theatre, all of this felt like a bad dream. I still couldn’t believe that Harsha had met with such a horrific accident.” - Lakshmi.

Although the surgery has been conducted, Harsha is still not out of danger

The doctors have operated on Harsha’s spleen that had ruptured and have removed it. He has also had several other surgeries to fix his broken arm and his jaws. But that still doesn’t place little Harsha out of danger. He still needs to stay in the hospital for about 2 weeks for physiotherapy and other medications.

“I am a milkman and my wife is a daily-wager. With our meagre income we can hardly make our two ends meet, leave alone arrange money for Harsha’s treatment. We have already spent around 9 lakhs on the surgeries by borrowing from friends and family. We need about 7 lakhs more for Harsha’s stay in the hospital. We don’t know how we can arrange for the funds.” - Jayanna.

13-year-old Harsha Vardhan’s life came to a standstill when he accidentally slipped from a third floor balcony and suffered severe internal injuries. Despite the surgeries that have taken place, little Harsha is not out of danger. His family is too poor to afford a prolonged stay in the hospital that will help him recover fast. Your support will help Harsha go back to his normal, happy life.

Your help can save little Harsha Vardhan's life 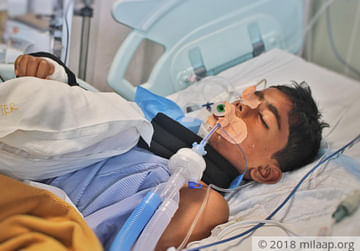 Harsha slipped from the third floor balcony and has ruptured his spleen. He is very critical