They Were Forced To Give Up One Child To Save The Other, But Now He Is Dying Anyway | Milaap
loans added to your basket
Total : 0
Pay Now

They Were Forced To Give Up One Child To Save The Other, But Now He Is Dying Anyway

Shares
Shares
Share on whatsapp
Faizan is brave. Not only because he’s fighting blood cancer, but because of how he’s fighting it. At just 14, he reads his own reports and knows the treatment he has to go through. He tells his parents to stay strong. But Faizan doesn’t hide his pain. He cries, sometimes a lot.

“He was only 4 when he was first diagnosed with cancer. 10 years later, he still remembers the pain he went through then. It never leaves you…even for a parent to watch your child go through this disease. People always think cancer means death, there’s no coming back. But our son fought it once, he can do it again.” – Abdul, father

Abdul and Noor Jehan had a difficult choice to make when their second child was born. They had exhausted all their savings on Faizan’s chemotherapy. He was just 4 then, they knew with all the time they had to spend in the hospital, all the money they didn’t have, they couldn’t raise a baby.


“We made a difficult choice…we knew that if she was to have a good life, we would have to give her to someone who can take care of her. She deserves that. So we gave her away. Watching one child suffering through a fatal disease, and giving away another…a mother’s heart can never come to terms with that.” – Noor Jehan

Just like how it began the first time, Faizan started having persistent cough and cold. Just that. No other symptoms, no severe pain. These two seemingly everyday occurrences led to the diagnosis of his blood cancer two days ago. The past two days have been the most difficult for the entire family.

“We were told that chemotherapy isn’t enough to save him this time. He needs a bone marrow transplant…it’s 20 lakhs. I feel defeated.” - Abdul

He has to start his son’s treatment tomorrow, but Abdul has nothing

Abdul has lost count of how much he has spent in just 2 days. He has to start Faizan’s chemotherapy tomorrow, but he doesn’t have the means to afford it. A bone marrow transplant is beyond his means. He’s only a daily wager in Hubli, and Noor Jehan does a little bit of tailoring work from home. None of these leaves them with much at hand.

“We’re back to where we were a few years ago. Why does he have to go through this pain again? He’s being so brave…we pray for him every day. I hope Allah is with him through this…brings him out of this.” - Abdul

Faizan wants to grow up to be a civil engineer when he grows up. He wants to study and have a normal life, nothing extraordinary. It’s all he ever wishes for now. Faizan’s future though is uncertain without a bone marrow transplant. It’s either now or never. 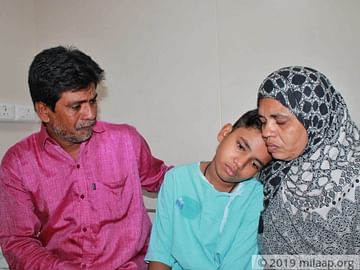 He Has To Start Treatment Tomorrow, But His Parents Have Nothing

His parents will be forced to take him back home without the transplant without your help.