This 4-year-old With Cancer Thinks There's A Monster In His Mirror | Milaap
loans added to your basket
Total : 0
Pay Now

Shares
Shares
Share on whatsapp
‘Why is there blood in my eyes? Am I a turning into a monster Amma? Or am I going to die?', asks a scared Diganth when he sees his own reflection in the mirror. His mother Shobha holds her tears back and consoles her little one saying, ‘It’s because of the fever you have. It will go away if you eat more vegetables and fruits.’ And that was the last time, little Diganth saw himself in the mirror. Now, he just lies in his bed, scared and sad, tearfully begging his mother to take him home. But Shobha can’t, because little Diganth needs a bone marrow transplant to fight blood cancer.

It all started as fever that only worsened Diganth’s health

Srinivasamurthy and Shobha were busy making plans for Diganth’s third birthday celebrations in their tiny home in a village near Kolar, Karnataka. But Diganth started having fever and he was given medicines to recover. But when his fever didn’t subside, his parents took him to Bangalore, Karnataka for better consultation. After some tests, Diganth was diagnosed with Acute lymphoblastic leukemia, a severe form of cancer that affects the white blood cells and is progresses rapidly if not treated on time.

Diganth after he beat cancer for the first time

Diganth could finally go back home and get back to his normal life after 6 months of gruelling chemotherapy and medications. He even started going to school and loved to spend time with his elder brother Dixit (7). But 5 months later, Diganth’s health started worsening and his worried parents took him to the hospital. Poor parents were utterly devastated when they were told that Diganth’s cancer is back and it is even more aggressive than before.


"Cancer has taken away Diganth's smile. His eyes have turned extremely red and he has black patches under his eyes. Each day, he’s just growing weaker and every day cries in pain. Only a bone marrow transplant can help Diganth fight cancer for good." - Shobha.

His father is struggling every day to arrange money

Srinivasamurthy earns Rs 9000 per month as a gardener in a factory and he can’t afford a transplant that costs 40 lakhs. Srinivasamurthy had to sell his wife’s jewellery and even borrowed money from others to help his son fight cancer for the first time. But now, with huge debts to be paid and no one to seek help from, he is desperately struggling to arrange money for his son’s transplant.

He needs your help to fight cancer

Diganth has been through a lot for his age. All this little one wants is to go back home and play with his elder brother. But he can only do it after undergoing a life-saving transplant. Diganth could fight cancer for the first time but now lack of funds stand in his way to fight cancer for one last time. Diganth needs your help to fight cancer.

Your contribution can give Diganth a cancer-free life 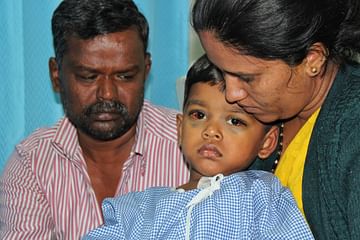 Diganth Cannot Accept That Cancer Did This To Him

He is afraid that he is going to die. Your support can save him.