Father Buried In Debt Struggles To Save His 15-Year-Old's Life From Deadly Cancer | Milaap
loans added to your basket
Total : 0
Pay Now

“His entire life till now has only been about going from one hospital to another, getting one blood test after another, and numerous rounds of painful chemotherapy. He should’ve been in class 10 now, but he was forced to drop out of school so many times that he hasn’t even started class 8. Cancer has taken away every little joy in his life. He begs us to take away the pain, but I’m more helpless now than ever.” - Srinivas, Chidananad's father.

When 15-year-old Chidananad looks back at his childhood, all he can remember is the many times he’s been pricked with needles. Now, Chidananad knows he has cancer and death stares him in the face. All he asks his parents is to be free from this pain. "Appa, I want to go to college. I want to grow up. I don’t want to live with this anymore," he begs. But Chidananad will only survive with a bone marrow transplant. Unfortunately, years of medical expenses have left Srinivas and Renuka neck deep in debts and completely helpless.

He has been fighting cancer since he was a little boy, and he finally has a chance to beat it for good

Three months ago, Chidananad woke up to a very high fever, but this was no ordinary fever. The last time he had felt like this was five years ago, and he knew that something was wrong. Even on the way to the hospital, Renuka and Srinivas hoped with all their hearts that his cancer wasn’t back. Unfortunately for their son, blood cancer was back, deadlier than ever.


“He was first diagnosed with cancer when he was just 5. We did everything in our power to get him treated. We thought it was the end of his fight. But cancer has proven to be stronger than our faith. It came back when he was 8 and now again when he’s 15. He is physically and mentally exhausted now. There are days when he can’t even get out of bed. Whenever his friends call to ask him when he’s coming back to school, he hangs up. He doesn’t think he’ll ever go back. But there is hope, he can finally beat cancer with a bone marrow transplant.”

Chidananad started chemotherapy two months ago, but it’s not enough to save him. He needs an urgent bone marrow transplant to beat cancer once and for all. This is his only chance, and his parents are desperate to do everything they can, but they’re falling short. Srinivas works as a helper in an office in Bangalore, but years of medical expenses have left him with nothing. Srinivas has no way to afford 25 lakhs for the life-saving transplant.


“I have lost count of how much we’ve spent over the years. We’ve taken so many loans, I don’t even know how I’m going to pay them back.We're struggling to even pay our daughter's college fees. It’s been 9 long years. And every time we think he’s better and past the trauma of cancer, it returns. He wants to study, he wants to be a mechanical engineer because he’s very passionate about cars. But I can’t promise him any of this. This treatment is his only hope, and it’s the only thing I can’t give him.”

Chidananad needs an urgent bone marrow transplant to beat blood cancer. He’s been undergoing chemotherapy for the past two months, but it’s not enough to save his life. His cancer is deadlier than ever and only timely treatment can ensure Chidananad lives to see a future. His parents have exhausted everything they had. They need your help to finally save their son from cancer.

Your support will save Chidananad’s life. 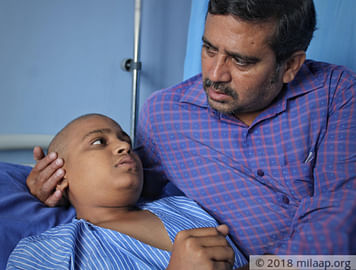