10-Year-Old Thought He Beat Cancer, But Just 100 Days Later It Has Relapsed

“We went to Tirupati and shaved our heads a few days after he was declared cancer-free last year. We didn't want him to get his head shaved as his hair had just grown back after all those high doses of chemotherapy. We prayed for cancer to leave him forever but before he could enjoy going back to his normal life, his cancer relapsed within 100 days,” – Dhananjay, father

Charan was diagnosed with cancer in 2015. His fight that lasted 3 years, ended when he was declared cancer-free in 2018. Just as he had started adapting to life, he relapsed. After having spent lakhs on his treatment already, Charan’s parents are unsure whether they can save him this time

It was the first day of his school after the summer break in the year 2015 and Charan came home with a high fever. Dhananjay and Vishalakshi took him to the local doctor in Gundalapalli, Andhra Pradesh. Despite giving medicines his fever kept recurring. He underwent a bone marrow test and was diagnosed with blood cancer. He’s been never stepped out of his house since then. The only time he went outside was for chemotherapy.


"We made sure that Charan underwent every chemo cycle on time. We also made sure he ate healthy food. Even Charan was cautious about his health and he didn’t go out of our home for 3 years in the fear of catching infections. We took all efforts to make sure he is cured, but we don’t know how his cancer came back again. We don’t even know how to save him this time.” - Nishalakshi, mother

Charan was declared cancer-free in June 2018. For the first time after 3 years, Charan was finally able to step out of his house and play with his friends. He even started going to school and he never missed a day. Charan thought his bad days are over. He thought he will never have to go to the hospital again and take those painful injections. 5 months later, his platelets level started dipping. His cancer came back again and this time it was worse than ever.

“Charan was in tears when I told him he cannot go to school anymore. He asked me why. I couldn't tell his cancer came back. He doesn't know he has cancer again and it will break his heart if I tell him now. The doctors told he can beat cancer once and for all with a bone marrow transplant. We didn’t have money for his chemotherapy, We don’t know how to arrange funds for his transplant.” - Dhananjay

Already in debts, Dhananjay is struggling to afford Rs 26 lakhs for Charan’s transplant

Dhananjay was in no position to afford chemotherapy to save his son. Due to the failure of crops, he has incurred huge losses. He could avail chemotherapy for his son only with a help of a foundation in Chennai. He is already in huge debt, which he had to take to look after his family due to crop failure. With no one to help, he’s struggling to arrange Rs 26 lakhs for his son’s transplant.

“I was more like a friend to Charan. He always dreamed of becoming a police officer when he grew up. He would say he wanted to save the world. Now, all I want is to save him and I can only do it with your help. Please help me.” - Dhanunjay, father

Charan thought that he might never have to go to the hospital again for that painful chemotherapy. He thought his good days have finally come. His parents thought the same. But his cancer came back and it’s deadlier than ever this time. Only a bone marrow transplant can give Charan the life he always wanted but his father can only afford it with your help.

Charan fought cancer once, he can fight it again only with your help 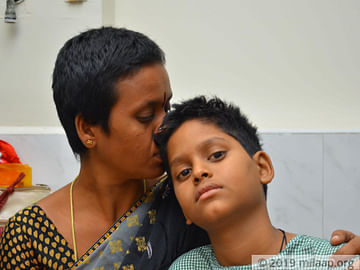