12-Year-Old Bleeds Uncontrollably Due To Blood Disease, Needs A Transplant To Fight It | Milaap
loans added to your basket
Total : 0
Pay Now

12-Year-Old Bleeds Uncontrollably Due To Blood Disease, Needs A Transplant To Fight It

Shares
Shares
Share on whatsapp
Bhaskar always had one goal in his mind - to study hard and get a good job to provide his family with a decent life. And so, he used to be completely absorbed in his studies and never knew a life outside it. But now he doesn’t even have the strength to pick up his books. Despite the weakness, Bhaskar still tries to open his book and study, but as he tries to read with his weary eyes, he sees drops of blood falling from his nose on the book. Now, he can't help but cry when he sees blood oozing out from his nose and ears, for he knows that it’s time for him to undergo one more painful blood transfusion as it’s the only thing that keeps him alive.

Parents Prabhakar and Padmavathi and their elder son Laxman Swamy (19) were the happiest when their younger son Bhaskar got a free seat in Gurukula school, a government school which is 20 km away from their village Devanabanda, Andhra Pradesh. They even bought a new cycle for him so that he could reach school on time. Bhaskar used to be one of the smartest students in his class and always scored the highest. But a few months after he started going to his new school, he started complaining about unbearable pain in his legs. His parents wrote it off thinking it might be because of riding the cycle for long hours. Little did they realize that a dreadful blood disease was stealthily taking over their son’s life.


“I used to give Bhaskar painkillers every time he complained about the pain in his legs. But day after day he was losing his strength. One day, I saw his pillow was covered with blood and Bhaskar was bleeding from his ears and nose. I didn’t understand what was happening to him. I put cotton in his ears his nose, hoping the bleeding would stop, but it didn’t.” - Padmavathi, mother

For better consultation, Bhaskar’s parents took him to Hyderabad, Telangana. The doctors ran a few blood tests and found out that Bhaskar is suffering from aplastic anaemia, a severe blood disease, which develops as a result of bone marrow damage due to which the body stops producing enough new blood cells. The only cure to recover from this dreadful disease is a stem cell transplant. Though it is good news that his mother is a suitable donor for the transplant, their lack of funds stands in their way.


“The past few weeks has been really difficult for us. We travel 8 hours every week, just to get him blood transfusions. Now, my son has become so weak that he stays in bed all the time. He needs constant support even to walk for while.He’s been fighting with his disease bravely. - Padmavathi, mother

His parents have used all their savings and more on his treatment, but it's not enough

Bhaskar’s parents grow crops in others farms to earn a meagre income of Rs 150 per day. The little that they earn was enough to look after their family and their children’s education. But now, they are struggling every day to meet Bhaskar’s treatment expenses. They even sold their new house and their cattle just to provide him with blood transfusions. For every transfusion that Bharat has to undergo, his poor parents have to spend Rs 70,000. The poor parents have spent 7 lakhs in just a month just to save their son. Now having no proper place to live, they are struggling each day to arrange 20 lakhs for the transplant.

Bhaskar was once a studious child and always wanted to provide his parents with a decent life. But all his dreams have come to a pause when he was diagnosed with a severe blood disease. Now only a stem cell transplant can end this young boy's misery but his poor parents have no money left to afford the transplant. Only your help can save Bhaskar from this dreadful disease.

Your contribution can give Bhaskar a new life 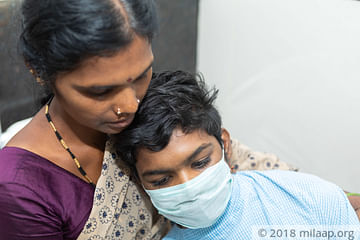 Once a class topper, this boy is now completely bedridden because of severe weakness