10-Year-Old Whose Lungs Are Being Eaten Away By A Deadly Infection Needs A Surgery Today | Milaap
loans added to your basket
Total : 0
Pay Now

“My daughter’s condition has become so bad that she coughs until she collapses from tiredness. She looks like she’s alright, but the doctors have told us about her critical condition. She will die without an urgent surgery, but I have completely run out of money now. I cannot even afford her medicines, let alone a surgery. I cannot lose my innocent child, please help me.”-Meharwan Singh, father of 10-year-old Vaishnavi

10-year-old Vaishnavi was a happy and bubbly little girl whose wish of becoming an elder sister was fulfilled recently, when her mother, Kiran, gave birth to her baby brother a few months back. She had not cuddled him enough before she fell very sick. Last April, she was hit by a bout of fever that lasted more than 15 days, the first time it came. Her mother took her to a local clinic in their small village in Uttarakhand, and after taking medicines, she had become alright for a while. But within a week, she fell sick again.

“I knew that her fevers were not normal because they had made her so unusually weak. Earlier, when she got fever she would never rest. But this time, she could not even get up from bed to go to school in the morning. She would tell me ‘Mumma, I feel very tired, can I please sleep?’ I had never seen her like this before; I was starting to get really worried about her health.”-Kiran.

While this poor child got sicker, doctors were not able to diagnose her condition for a long time

Vaishnavi’s health started deteriorating after her fever refused to subside. No amount of medicines could make her feel better. Kiran took her daughter to many doctors in Uttarakhand, but none of them could understand what was wrong with Vaishnavi. Kiran had almost run out of hope when her husband suggested that they take her to Delhi, where he works as a small painter for a meagre income.

“We had almost exhausted whatever little savings we had by this time, but bringing her to Delhi seemed like the only choice we had left. We were tired of hearing doctors tell us that ‘It could be a blood infection’  - the uncertainty was adding to our fears. She was just getting worse with time – she had stopped eating completely and lost a lot of weight. My child stopped looking like the vibrant young girl she once was. I wanted to save her at any cost.”-Meharwan.

Vaishnavi was found to have a severe infection that was damaging her lungs, she needs surgery today

Two months after she developed recurrent fevers, she also started coughing very badly. Her parents took her to Delhi, and it was there that doctors suspected tuberculosis after a round of tests and scans. Vaishnavi’s lungs were found to have infected pus pockets that were slowly eating away her entire lungs. In addition, the doctors also found similar pus infestations in her liver. A surgery is the only way she can survive at this point.

“The doctor has told us that the pus pockets need to be cleared through a surgery immediately or the infection can spread to the whole lung and kill her. They may even need to remove a part of her lungs that have been fully damaged. My daughter does not tell us her pain because she is too weak to speak. When she tries to speak, she coughs. She is going through such a painful period in life, but I have not seen unpleasantness on her face even once. She knows that her parents are struggling to save her; my poor kid is so considerate even when her life is in danger. I don’t have much time left to arrange funds – she needs the surgery today or she will not live.”-Meharwan.

Vaishnavi’s lungs are being damaged by a deadly infection that has the potential to spread rapidly and kill her. Her breathing has been compromised and coughing incessantly makes her pass out from tiredness after a point. She is very critical and needs a surgery today. The family is living in a rented room in a slum in Delhi as they cannot afford anything better. He needs help to get his daughter a life-saving surgery now. Her father, a poor painter, had borrowed money from everyone he knew to get her treated this far.

Your kind contribution can help this desolate father save his daughter 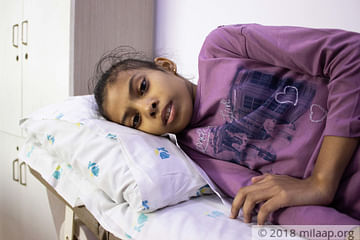 Vaishnavi Will Stop Breathing Forever Without The Surgery

The deadly infection can spread to the whole of her lungs and kill her soon. Please save her.