Baby Sreenandh Is Spending His Third Birthday In The Hospital After Being Diagnosed With Cancer | Milaap
loans added to your basket
Total : 0
Pay Now

A
You are sending a message to
Anoop
Go back

Shares
Shares
Share on whatsapp
Rajeesh and Rejitha are worried parents. Their only child- 2-year-old Sreenandh, has been diagnosed with cancer and needs urgent care. The painful reality is that the parents cannot afford the care.
The couple has been married for four years. Rajeesh is an auto driver. He has two brothers- one is a labourer and the other is a driver too. Rajeesh says that his daily savings after expenses amount to Rs 300.

Both his parents are farmers, and Rejitha is a housewife. The couple was ecstatic at the birth of their child, and were looking forward to celebrating their son’s birthday this year. Little Sreenandh turns 3 years old on October 21st.

“His birthday is coming up- and we are taking him to the hospital constantly. It hurts me to see my son in such pain.” – Rajeesh

It all started a little before Onam

For Rajeesh and Rejitha, Onam is the biggest festival they celebrate. This year, they had planned a family celebration. They were a little concerned about Sreenandh- the baby had a constant fever, and was on medication. But both parents got really worried when their baby boy began looking pale. They knew this was not a simple fever. Doctors at the local hospital worried, and suggested that they take Sreenandh to a bigger hospital at Kozhikode.
A little before Onam, Rajeesh’s world was shattered when his son was diagnosed with leukemia.

It has been a difficult time for the family

Rajeesh is an auto driver. He had to stop his education after class 12 due to financial difficulties, and after years of working as a labourer, he managed to pool together Rs 10,000 to buy an auto. This is the only source of income for the family.
The family lives in Wayanad, but had to shift to Kozhikode for Sreenadh’s treatment. They spend Rs 200 a day for rent, and even store up groceries from their house as they cannot afford to buy anything outside. Each time they take a trip to the hospital, they have to go by auto as they do not want their son to fall sick after traveling by bus. Each trip costs them Rs 160.
So far, Rajneesh and Rejitha have spent over Rs 80,000 on Sreenandh's treatment. Doctors are estimating the cost of treatment to be over Rs 6 lakhs.

“I cannot even think of affording such a big amount. A few days later, my son will spend his third birthday in the hospital. I cannot imagine him not recovering!” – Rajneesh

While they are in the hospital, Rajneesh cannot go about his daily job as an auto driver. The family is struggling to afford expenses. Doctors say that Sreenandh's type of cancer is potentially curable and he can recover.
Your contribution can ensure that baby Sreenandh can afford his treatment, and live a long healthy life. Help save Sreenandh! 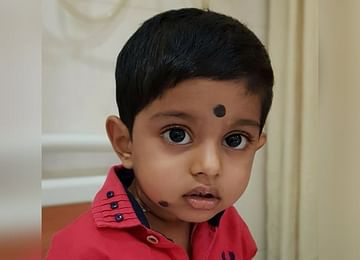