8-Month-Old Could Succumb To Severe Liver Condition, She Needs A Transplant Before It's Too Late | Milaap
Receive tax benefits by donating to this cause.

8-Month-Old Could Succumb To Severe Liver Condition, She Needs A Transplant Before It's Too Late 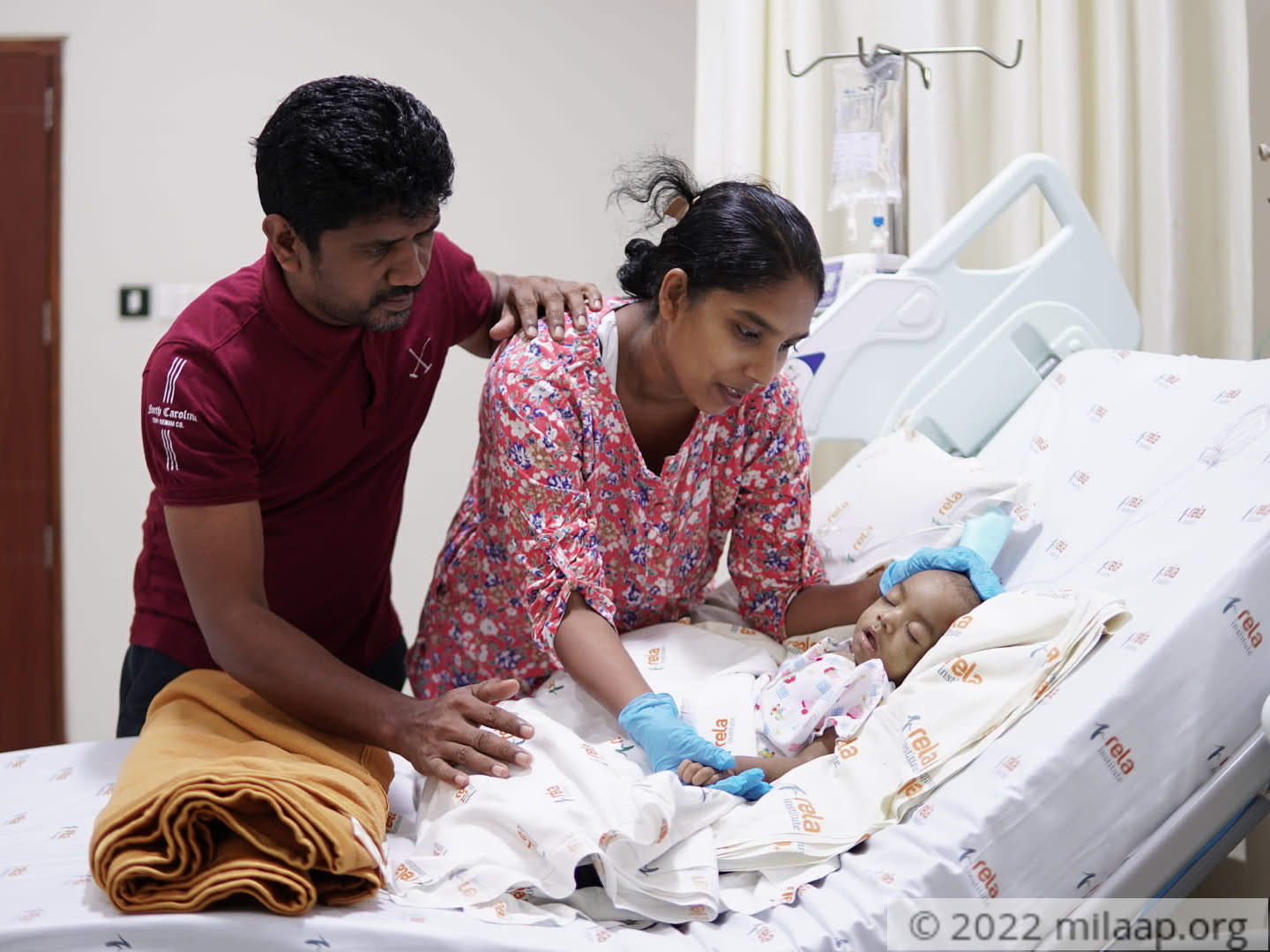 "I have raised 2 kids before, but it pains me to see my third one suffer so much. Within a month after her birth, she was diagnosed with jaundice and not a single day has passed by where she wasn't pricked with needles or given medicines, stronger than her tiny body could handle. Despite all this, her stomach bulged up and we had to take her to the hospital. Just by looking at her pale, yellowing skin and eyes, the doctor suspected a liver failure. Since then my daughter has been admitted in the ICU 4 to 5 times, with breathing troubles and a slow heart rate." - Eranda, mother

After her liver, now her other organs are at risk of failing too

8 months ago, Eranda and Ramaiah were blessed with their beautiful baby girl, Rehana. In the midst of the gloomy times that was the pandemic, Rehana was the only reason for joy in their household. But it wasn't long before her smile turned into agonising cries for help. Every night, her parents would take turns to put her to sleep, but all their efforts were in vain as nothing could soothe her pain.

Rehana's liver is damaged, due to which there is fluid build-up in her stomach. A liver transplant is her only curative option now, for which her parents have come to India all the way from Sri Lanka. Rehana has been hospitalized multiple times over the course of just 15 days. Every time she was admitted in the ICU, her parents knew that it was a narrow escape from death because her failing liver was troubling her immensely. Her belly is swelling up and all her organs are under extreme pressure to keep functioning normally.

Despite her mother being a donor, they don't have funds for her transplant

Rehana's parents readily signed up to be her liver donor. However, they were both found to have fatty liver and were deemed ineligible. Yet, Eranda didn't lose heart. She started doing rigorous exercises to become a perfect donor match for the transplant and save her daughter.

"All our hopes were pinned on Rehana's timely transplant, as that was her only chance of survival. Not only is her liver malfunctioning, but the pressure on other organs is so high that they too might sustain damage. At first, our fatty liver was the prime reason that my wife and I were rejected to be her donor. But my wife refused to give up. Our happiness knew no bounds when she became eligibile to donate part of her liver to our duaghter... Until we found out that the cost for this would be INR 22.5 lakhs. It is very hard for us to accept that now our daughter's life has been tied to this amount, and without it, she could lose this battle any moment." - Ramaiah, father

The fear of losing their baby keeps them up at night

Leaving their other two kids behind wasn't an easy decision for these parents to make. But they had no other option, as the financial crunch hit them hard with Rehana’s medical bills piling up.

“My husband is a driver, while I manage the house and the kids. But Rehana's long ICU stays have exhausted all our savings - which were supposed to be the cushion to fund her transplant charges. Little did we know that our savings would hardly be enough for even her laboratory reports, and that we would have to frantically scramble to arrange lakhs of rupees in a short time. Rehana's condition is so fragile that my husband sold off our car and home without a second thought. We have spent many a sleepless nights, terrified that we would lose our child if we were to shut our eyes for even a second.” - Eranda, mother

A normal baby at 8 months of age would be adept at identifying faces, and developing a bond with their parents. But that is not the case with Rehana. All these high dosage medicines have hardly kept her in senses. But now, it has reached a stage where medicines solely are inefficient in saving her life and she needs an urgent transplant. Her parents desperately seek your help before it's too late to save their child.