Born 3 Months Premature, This Newborn's Every Breath Is A Painful Struggle | Milaap
loans added to your basket
Total : 0
Pay Now

Born 3 Months Premature, This Newborn's Every Breath Is A Painful Struggle

Shares
Shares
Share on whatsapp
At 1 AM on January 3rd, Sampath borrowed his neighbour’s car and rushed his pregnant wife to Bangalore. Her pain was unbearable. She was bleeding, but all she worried about was her baby’s life. Only 6 months pregnant, Shwetha thought her baby wasn’t going to make it out alive that day.

Their baby survived against all odds, but his life is still in danger

Sampath and Shwetha had almost given up hope when the doctors told them that there was no more amniotic fluid left in her womb. This clear, yellow fluid that surrounds the baby in the uterus is extremely important for healthy fetal development. Too much or too little of the fluid can cause complications. Their baby’s survival was uncertain, but she had to deliver the baby immediately. At 8:10 am on January 3rd, Sampath and Shwetha’s baby boy was born. Alive.

“He was underweight and struggled to breathe. He was taken to the ICU as soon as he was born. But he was alive! We couldn’t believe it. His condition was critical, though. We couldn’t see him for 3 days. The first time I saw him, it was through the glass of the incubator. His hands, legs, face… everything was covered in tubes.” – Sampath, father

Shwetha had to be discharged because of their lack of funds, but their baby won’t survive without treatment

Their baby boy has been in the NICU for a little over a month now. Shwetha is slowly recovering from surgery, and Sampath had no choice but to go back to work in their hometown, Maddur, Karnataka. He also has a 6-year-old son to take care of. Sampath, a tempo driver, helps transport farming material, vegetables, furniture etc. He earns Rs. 10,000 per month. With this, Shwetha and he were able to pay rent and send their son to school. They didn’t have much to spend on anything else. The only trip they’ve taken is to the Mysore Palace, a couple of hours away from their home.


Shwetha and Sampath outside Mysore Palace in their happier days

“We live a very simple life. I had no means to even start my son’s treatment. I have borrowed 1 lakh from my boss, and a few thousands from my relatives. I’m very grateful for them, but it’s not enough. My wife needed to stay in the hospital for at least a week more to recover, but I couldn’t afford even that and had to get her discharged.”

Their newborn needs your help to survive

Sampath now hasn’t seen his baby boy in nearly two weeks because he has to work. But his income just isn’t enough to keep his baby in the NICU for 8-10 more weeks. Shwetha stays in Bangalore and calls Sampath every other hour, begging him to find a way to continue their baby’s treatment. Their baby boy needs to get stronger to go home.

The newborn has only known pain till now. He can go home in his parents' arms, healthy with your help. 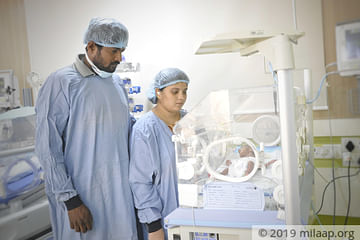 He Survived Against All Odds, But His Fight Isn't Over Yet

Shwetha and Sampath's baby boy needs to stay in the NICU for longer to survive.