DD
You are sending a message to
Dr Dhananjay
Go back

“Without even realising that our happiness could be short-lived, we started making innumerable plans for welcoming our baby when we got to know that Sarita was pregnant. When the baby did not cry out after he was born, we got scared. Tests confirmed that he has two holes in his heart. He was immediately moved to the neonatal intensive care unit (NICU). Since that day, my son has been fighting for his life. Doctors said he needs an urgent surgery but we don't have money even for his daily hospital expenses. We are scared we will lose him.” - Vishnu Kumar, father.

Vishnu and Sarita’s baby boy was born with an atrial septal defect that causes holes in the wall between the heart's upper chambers. He is unable to breathe and gets tired very easily. The baby was also born with Down Syndrome and this has added to his misery.

“Only Sarita was allowed to enter the room and hold the baby for few minutes just to calm him down when he was crying in pain. It has only been two days that we have brought him home but he is not keeping well. We have to take him to the hospital again. He has a severe cold and can’t breathe properly. I can’t bear to see my baby suffering so much, I wish I could do something to make him better.”

Sarita with her baby boy

Besides Vishnu’s little baby being sick from the day he was born, Sarita’s health has not been supporting her at all. After her delivery, her entire body was swollen with fluid accumulation. The doctors said that it was because of a protein deficiency. She had to stay in the hospital for 15 days before she could be discharged.

“For the last two months, I have had no idea how time passed away. My wife became very sick after her delivery and on the other hand my baby boy was in the ICU. I waited on the hospital corridors with empty stomach, passing every moment in fear that I will get some bad news. Now, even though the baby is home, his health is not improving at all."- Vishnu

“I have never had a permanent job in my life. Sometimes I get jobs on contract-basis and earn a meager amount of Rs 6000-7000 in a month. But for the last two months, I had no jobs. Neither have I been able to go for any interviews because of my son’s sickness. I have already spent 5 lakhs on his treatment by borrowing from my uncle and now I need another 3.5 lakhs for the surgery. I am so helpless that I have to take my sick son and wife to the hospital on a 4 hour long bus ride that adds to their discomfort. I don’t know how I will repay the money or afford the surgery.”

Vishnu and Sarita’s 1-month-old baby boy is in need of an urgent heart surgery but his family is too poor to afford that. Your kind contribution will save this baby's life.

Your support can save the little baby's life 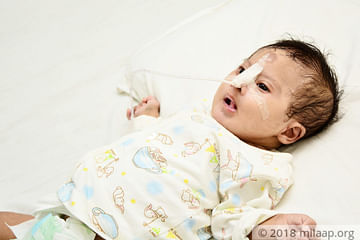