“Our older son is 5-years-old but his body is like a 1-year-old child. His physical growth is not like other children. He can’t play or even stand up without support. He can’t walk properly and hasn’t even started school yet. Now, our younger 8-month-old son has been diagnosed with the same disease and risks suffering the same fate if we don’t get him treated soon. A bone marrow transplant can save him from living a painfully short life.”

Ramesh and Prema’s 8-month-old baby boy was born healthy and they were waiting for him to turn 9-months-old to name him. They fondly call him paapu (means 'baby' in Kannada) and he responds with a bright, wide smile. Little did they think that their youngest would also suffer from the rare genetic disorder that their older son Likith (5) has. However, there’s hope for the little one. A bone marrow transplant can save him from this degenerative disease, but he needs it at the earliest before his condition worsens beyond repair.

The disease progresses rapidly and damages physical and mental growth

Ramesh and Prema’s baby boy has a rare, dangerous disorder called Mucopolysaccharidosis because of which his body lacks the enzymes needed to break down a carbohydrate called Mucopolysaccharides. The deposition of this in the tissues damages and distorts the body, stunting physical growth and development, limits joint movement and even affects intellectual development.

This disorder only gets worse with time, and in severe cases, shortens the lifespan of the child considerably. I may lose them both to it.

Their baby is blissfully unaware of his battle for life

“He was such a happy, cheerful child, we never thought he was fighting a life-threatening disease, and that too the same one that our older son has. He cries sometimes, I think his limbs hurt a lot. But most of the time he's playing with his brother and goes to anyone that calls out to him. We need to get him treated before it's too late. He has a chance to make it. Our poverty is the only thing standing in the way.”

He needs a bone marrow transplant in time, otherwise, the disease can be fatal

“We found out about Likith’s condition very late. He had severe pain in his joints and started vomiting and falling sick every other day. We believe that we cannot cure him.But with paapu we’ve found out in time, so he has a good chance of getting cured. He needs to have the transplant before his development begins to decline. We can barely afford a decent living, 32 lakhs is unimaginable for us.”

Ramesh works as an auto driver and can barely keep his family of four afloat right now. With medical expenses for both his sons only increasing, he has no way to give his baby boy the life-saving transplant. Ramesh and Prema are desperate to save their baby but see no way to overcome their financial obstacles.

With your support, they will finally be able to start their baby’s treatment and help him step towards a healthier future.

Ramesh and Prema’s baby boy’s disease will only get worse and can be fatal without timely treatment. A bone marrow transplant is his only chance at a normal, healthy life, but his parents are struggling to manage both their sons' treatment and can’t afford the amount needed for the transplant. Paapu will end up like his brother if he does not get this surgery by the time he turns 1.

Only you can save this 8-month-old baby from a dreadful fate. 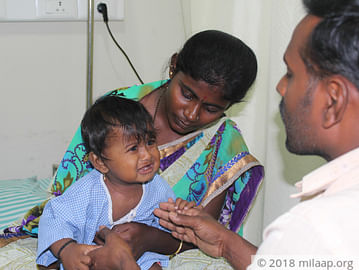 Prema and Ramesh's baby needs a bone marrow transplant at the earliest to live.

UPI: givetorameshprema@yesbankltd (Copy to clipboard)
Or
Click here to read the instructions before you make a bank transfer.