5-Year-Old With Cancer Begs Mother To Send Her To School, Unaware That She Won't Make It Without Treatment | Milaap
loans added to your basket
Total : 0
Pay Now

5-Year-Old With Cancer Begs Mother To Send Her To School, Unaware That She Won't Make It Without Treatment

“Every morning my daughter would be the first one to wake up. She used to be so excited to go to school that she would put on her uniform on her own, ask me to braid her hair soon so that she could go to school early . But now, she cannot even get up from her bed because of how weak cancer has made her. Every day she asks me, ‘Amma, will my fever go away? When can I go to school? Please send me to school tomorrow' and I don’t know what to say. It’s been days since my daughter has been in the hospital and I worry about how we can afford her next day's treatment when we can't even afford a single meal anymore.” - Rani, mother

5-year-old Ashwitha lives with her parents Rani and Suresh, and younger brother Sushanth in Ashta village, Telangana. Soon after she comes from school, she would spend time with her little brother, playfully teasing him and running around the house.

However, 2 months back she started complaining about severe pain in her legs. Her parents took her to a local hospital and she was given medication. But her condition only worsened with each passing day. Even after taking her to several other hospitals, no one was able to find out why she is in pain.


Little Ashwitha when she was hale and hearty

“I was worried when Ashwitha wasn’t getting better even after she was given medication. A few days later, her face and stomach got swollen. She was crying because of excruciating pain in her body. Looking at her growing weak and tired, I got scared. We immediately took her to the hospital.”-Rani, mother

Ashwitha has been diagnosed with blood cancer, she needs to be treated immediately

Finally, doctors were able to diagnose her.  Ashwitha was diagnosed with Acute B Lymphoblastic Leukaemia, a type of blood cancer which starts in white blood cells that progresses quickly and can turn fatal within months. Ashwitha was admitted to the hospital 10 days ago and has now started chemotherapy. It's very crucial that she continues the treatment to stay alive.

“I miss my daughter's happy face. Every day she used to ask me to cook her favourite omelette and she would happily eat it to the last bit. But now she’s not even able to eat food or drink fluids. She always asks me to bring her books so that she can write and learn but I don't even have money to buy that. I give her a pen and ask her to write something on my palm, hoping she will smile again.”-Rani, mother

Suresh and Rani work on others farms to earn Rs. 100 per day. With the little income they earn, they have to take care of both their kids. Suresh borrowed 2 Lakhs which is to be paid with high interest for his daughter’s treatment. But now he’s on the verge of exhausting all his money and has no help to provide his daughter with the life-saving chemotherapy.


“We're asking everyone we know to help us with our daughter’s treatment. We could only start the treatment with money we borrowed, but now we’ve exhausted that money. We don't know anyone who can help us"- Rani, mother

Little Ashwitha longs for the day when she’ll get better and will start going to school again. But money has become a hurdle for her parents who are now left with nothing and cannot afford the treatment any longer. Ashwitha needs your support so that she can get cured of the deadly blood cancer and can go back to school again.

Your support can help Ashwitha Live 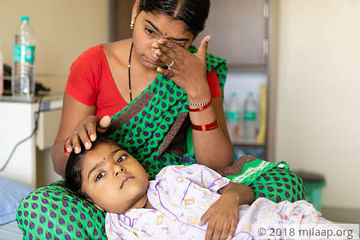 All She Wants To Do Is Go To School, But Cancer Stands In Her Way

Ashwitha is suffering from blood cancer and needs urgent treatment.

UPI: givetosureshfund@yesbankltd (Copy to clipboard)
Or
Click here to read the instructions before you make a bank transfer.