Shares
Shares
Share on whatsapp
Fathima is an MSc graduate who used to work as a teacher in a small private school in her hometown of Sivakasi, Tamil Nadu. She had to quit her job after getting married and having baby Arshatha, as she intended to become a full-time mom and focus on family life. But as fate would have it, her baby was born with a congenital heart disease and is very critical at this point. Without regular jobs, Fathima and her husband Anees are struggling to arrange money to save their daughter before it is too late.

"My poor Arshatha is running out of breath with every passing day. I am so worried about her that I take her to the hospital every day, to get her oxygen levels checked. Lately it's been so dangerously low, that we fear for her life every minute of the day.”-Fathima, mother of 4-month-old Arshatha.

When Baby Arshatha was born seemingly ‘normal’ within a year into their marriage, Fathima and her husband Anees thanked God for blessing them with a healthy sweet angel. They named her 'Arshatha', a name that the couple loved and had agreed on months before her arrival. But within a month, she started exhibiting symptoms of respiratory distress; she started suffering from cold and fever frequently too. After taking her to many clinics in Madurai and Chennai, she was finally diagnosed with a large hole near the aortic valve (a major vessel that facilitates the pumping of the oxygen-rich blood out of the heart). This was contributing to less oxygen flow in her body, and subsequent breathing problems. When these poor parents learned that a surgery could solve her problems, they were relieved; but only until they realized that it was well beyond their means.


Baby Arshatha, before she got sick

“Arshatha cries all day and night now. She has become so underweight that I can barely feel her in my arms. She does not drink milk as she used to in the beginning – she is getting weaker by the day. The medicines are not working anymore. I pray for her to get better, knowing very well that prayers are not enough at this point, but there is nothing else I can do.”-Fathima.

Despite begging everybody she knows, Fathima has not been able to get enough money to even take her baby girl to the hospital

The last time Fathima took her baby girl to the super-speciality hospital in Chennai where she is being treated was a month-and-a-half ago. Her baby girl’s condition is only worsening by the day. Her husband, Anees, works as a driver, but only when trips are available. If he gets work, he earns up to Rs 500 a day. But ever since his daughter’s diagnosis, he has not been able to go to work as before. Despite being so educated, even Fathima cannot go back to work as her baby girl does not allow anyone else to hold her. Fathima has asked everyone in her family for help, but nothing has come so far. She had borrowed Rs 20,000 and used up her savings to take her baby to Chennai the first time, but that money is long exhausted. Now the family struggles to afford proper meals, as they are buried in debt and without income. Their sick baby’s face haunts them – without help, she will not survive.

Baby Arshatha has a hole in her heart, which is causing dangerously low levels of oxygen in her body. She needs an urgent surgery to survive. Her poor mother cannot save her despite being educated and is running out of time and money.

Your kind contribution can help this mother save her only child 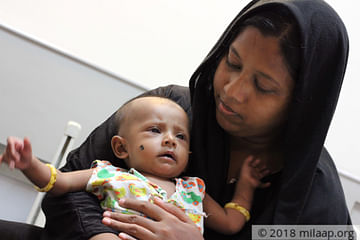 Baby Arshatha Is Breathless And In A Lot Of Distress

Unable to feed or sleep soundly, this baby will slowly succumb to heart disease without help