After Being Hit By A Truck, 19-Year-Old Fell Into A Burning Pit Of Fire And Is Fighting For His Life | Milaap
loans added to your basket
Total : 0
Pay Now

After Being Hit By A Truck, 19-Year-Old Fell Into A Burning Pit Of Fire And Is Fighting For His Life

“My son’s entire body is completely burnt. He is blind in one eye. He is battling for his life in the hospital with unbearable pain while I am struggling to save him on my own. He needs surgery in a day, he will not make it without it,” - Laxmi.

Akhilesh was riding his bike, a truck hit him and he fell into a burning pit of fire. He has suffered severe burn injuries all over his body. Ever since then, Laxmi, a single mother has been struggling to save her son. Now she has only 24 hours.

Akhilesh was riding a bike in his village, Kaligote in Andhra Pradesh. Suddenly, he saw thick fumes of black smoke in the air which covered the road. A farm right next to the road was burning the residue, to prepare for the next season’s planting. Akhilesh halted his ride because of poor visibility. That’s when a truck from the opposite side hit Akhilesh who was on his bike. Akhilesh along with his bike fell into the burning field.


His bike burst when the fuel came in contact with the fire and Akhilesh lay unconscious as his body was burning in the flames for  five minutes. He was pulled out of the fire by an onlooker. Strangers rushed him to a nearby hospital in an auto.

“My son had a severe head injury and had deep burns from feet to shoulders as he fell on his back. In the hospital where he was admitted, he received nothing more than dressing and seven stitches on his head. As a result, his skin was severely infected. I feared for his life and rushed him to Hyderabad where he was treated for his injuries.  I cannot imagine the horrible pain he must have gone through,” - Laxmi.

Akhilesh’s optic nerve was damaged and he lost the vision of his right eye. He needs to undergo a process called debridement to thoroughly clean the wounds and remove unhealthy tissues. He will also need skin grafting surgery to cover the flesh. The surgery has to happen tomorrow or else he may soon succumb to his wounds.

“He opened his eyes after five days and he only remembers a heavy vehicle hitting him. When he realised what happen to him, he cried inconsolably. My son was heart broken when he found out that they amputated his toes. He fears he may never walk again,” - Laxmi.

Akhilesh who lost his father at a very young age has only one aim in his life - to look after his poor mother. He realised at an early age that education can help him achieve his goal. So, he always made sure to secure good grades. After his intermediate, he earned scholarship in Giriraj College, Nizamabad and was pursuing B.Sc first year.


“I was always proud of my son. He is a bright student and a hard worker. He never let me worry about his expenses. During holidays, he worked in farms to pay his hostel fees. He never complained about our poor conditions. He always made everyone laugh with his jokes and loved his family. But now, my son barely responds to me. He lives in constant fear of losing his life,” - Laxmi.

This single mother cannot save her son without your help

8 years ago, Laxmi lost her husband Gangaram to a liver disease. Ever since then she brought up her three children on her own by working in a tobacco company. She barely earns Rs 1000 a month and with that little amount she has managed to feed her children.

“I borrowed huge amounts from my relatives and the villagers, almost around 8 lakhs. I have to work all my life to clear this debt. I need about 14 more lakhs to afford his surgery and it is beyond my means. He needs to undergo the surgery tomorrow and I am helpless, please help me,” - Laxmi.

Your kind contribution can help Akhilesh undergo a life-saving surgery. 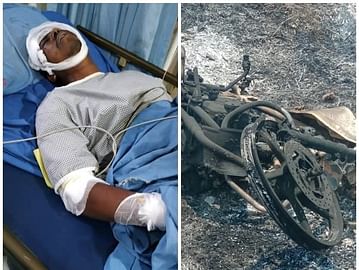 Without urgent surgery Akhilesh will soon succumb to his wounds