“My baby boy was sitting and playing on the chair when my wife turned away to do something and the very next moment, he had fallen down. He cried continuously for a few minutes, but was okay after that. We didn’t observe any visible damage, so ignored it. But after three months exactly, his head started swelling up. We had to beg and borrow to take him to another city, in order to get an urgent surgery done. The surgery is successful but I am left with no money to continue his treatment.”-Ghouse Mohiaddin, father of 1-year-old Abubakar.

After their baby boy’s fall, Ghouse and his wife, Sana, looked for all signs of distress and pain in him. But because he seemed fine even after a few hours, they did not think that it would turn out to be something serious. But sadly, they were wrong. Within 3 months, he started suffering from recurrent high fevers.

“He was eating and sleeping well. He was even responding to us normally, so we could have never imagined that the fall had done something to him. But when he started getting these fevers, I got worried. We would take him to the local doctor in our hometown of Raichur, Karnataka, where they would give medicines to control the fever. We kept believing that the weather had done this to him.”-Sana, mother.

Abubakar’s head started becoming bigger and bigger 15 days back, along with high fever. His parents were more than shocked - they had never seen anything like this in their lives before. They left everything behind – Ghouse’s old mother and 3-year-old daughter Sadia – and rushed him to a known doctor in their area without further delay. The doctor advised them to take the baby to a good hospital in Bangalore fast.

“We did not understand what was happening to our baby. Within a few hours, he also developed grave breathing problems. We had to call an ambulance fast and go to Bangalore overnight. I held his hand throughout the journey. With his eyes closed and unresponsive, I prayed that I don’t lose him before we get help.”-Sana, with tears in her eyes.

Abubakar even had an emergency surgery to save his life

On admission at the Bangalore hospital, doctors found that Abubaker’s brain had a significant fluid collection that was getting infected. They informed his parents that the child needed a surgery immediately or he would not survive. Abubaker called up his close family and friends, and managed to arrange enough money required for the surgery.

“I thanked Allah when the doctors told me that his surgery was successful. I couldn’t imagine losing him. He was growing up to be such a smart and cheerful kid - we were always so proud of him. Financially, this surgery had cost me a lot, but it doesn't matter, money will come and go. What was important was saving my son’s life.”-Ghouse.

But this little boy is not fully out of danger; he needs prolonged medical care to be healed fully

Abubakar may have had a successful surgery, but he needs antibiotics and further ICU stay to be completely okay. He is still recovering from the surgery, and needs 24/7 monitoring. His father, a godown worker in Raichur, had spent his last paisa in paying for his surgery. He even had to borrow to pay the full amount. And now, he is left with absolutely nothing.

“I make only Rs 8,000 a month. With that money, I have to take care of my mother, my two unmarried sisters along with my wife and two children. Life was already so difficult before my child got so sick. Poor people can never be prepared for situations like this. I have been on leave for 2 weeks now. My wife and I are just pushing hard through days. We have no money for our son’s continued treatment and need urgent help.”

After an accidental fall that caused severe brain injury, Abubakar is still recovering from an emergency surgery he underwent. He has to stay a couple of days more in the hospital as this is a very critical period. He needs to be on strong antibiotics as he is still healing and is also highly prone to further infection if his health is not monitored well. His father, a poor godown worker, understands his complications, but has completely run out of funds. 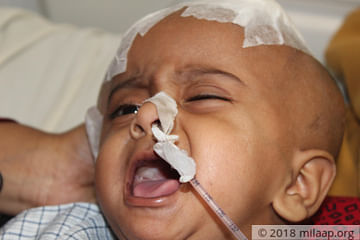