This 8-Year-Old With 100% Damaged Liver Has Only Few Hours Left For An Urgent Liver Transplant | Milaap
loans added to your basket
Total : 0
Pay Now

A
You are sending a message to
Vibhuti Sharma
Go back

Shares
Shares
Share on whatsapp
In just 2 days, Abhishek’s condition worsened so much that he lost his consciousness. He was diagnosed with jaundice which eventually damaged his liver completely and now it has even affected his brain. Abhishek who is now on ventilator support, can only be saved with a liver transplant. With only few hours left for the transplant, his poor father is struggling to arrange Rs 17 lakhs for the transplant. Parents Ram and Ranjana need your help to save their son.
.

A month ago, he started losing his appetite and threw up everything he ate

Abhishek grew up very healthy and active. He did well in his studies and sports as well. He has won many prizes for running, and story telling competitions. His parents were brimming with pride whenever he came home with medals and certificates. While they were very hopeful of his future, life took a tragic turn. Unfortunately, just a month back, Abhishek  suddenly started losing his appetite and he drastically lost weight. A few days later, he was diagnosed with jaundice when his eyes started yellowing.


“Despite taking pills, the yellowness in his eyes didn’t go. We consulted doctors and they just advised us to give him fresh fruits and vegetables. I was extra cautious about his diet ever since he got jaundice. We took him to different doctors, tried different medications, yet the jaundice didn’t go. It was just worsening our son’s health. He was scared to even eat food because every time he eats food, he vomits immediately.” -Ranjana, mother.

Poor parents finally found hope in a multi-specialty hospital in Delhi. The doctors ran a few tests and found out that the progressive jaundice has affected his liver because of which his liver has been completely damaged. Further, his damaged liver has affected his brain because of which Abhishek has lost his consciousness. He’s currently on ventilator support and has only few hours left to undergo a liver transplant. His mother Ranjana is a suitable donor for him but the poor parents cannot afford it.


“In just a month, my son’s life has changed drastically. He never had any serious illness before and now he’s at death’s door. We don’t have much time left to save my son. If we delay it further, we’ll lose him forever.” - Ranjana, mother.

Ram is an electrician, having no fixed income to look after a family of four including his daughter Sweety (12). He would only get paid whenever there is work. He has spent Rs 1 lakh in just 4 days for his son’s treatment just by borrowing money from his friends and relatives. But now, with only hours left, arranging Rs 17 lakhs for his son’s transplant is next to impossible for him.


“All my friends and relatives have been very generously supporting me for the past few days. But whatever little amount they’ve given, is not just enough for the transplant. I just want to see my son happy and healthy again. Please help me.” - Ram, father

8-year-old Abhishek who once was an active and energetic runner is now battling for life. Despite making all the possible efforts, Ram is unable to arrange funds to save his son. Abhishek has only a few hours left for the liver transplant and your contribution can save his life.

“It is impossible for me to arrange Rs 17 Lakhs in just a few hours. I want to save my son and I can only do it with your help.” 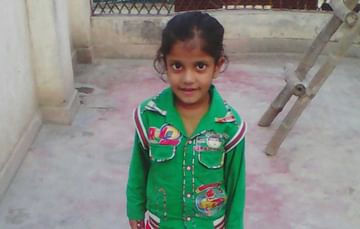 Abhishek is on ventilator support, lying unconscious and his condition is very critical

UPI: givetoramchritrakushw@yesbankltd (Copy to clipboard)
Or
Click here to read the instructions before you make a bank transfer.