Shares
Shares
Share on whatsapp
Little Abhijit lies down in his bed and thinks about those days when he used to run around the playground with his friends. That is all he can afford to do now as going to school and enjoying with his friends has become a thing of the past. He gets exhausted very easily and cannot even dress up without the help of his mother. Lying down in his bed, he sheds silent tears reminiscing his life before he was diagnosed with cancer.

“He had a swelling in his neck but it did not pain. So we did not pay much attention to it. But very soon it started growing big and we had to take him to the hospital. The doctors conducted tests and soon we were told that Abhijit has blood cancer. That was the first time I regretted not getting a proper education. Had I been more aware, I would not have wasted any time in taking him to the doctor for the diagnosis. Sometimes I feel that this delay made things worse for my son. ” - Kajal Let, father of Abhijit.

Abhijit hates staying back at home and doing nothing. Sometimes, he throws a tantrum telling his parents that it has been very long that he has not met his friends and that he doesn’t want to stay at home. However, his fatigue doesn’t allow him to walk even for a few steps.

“We saw how heartbroken and scared Abhijit was when he got to know about the operation in his neck. We did not tell him that it was cancer. He knows that it was just a tumor that has been removed. But blood and pus still comes out from his wound and he can’t move his neck properly. He hardly sleeps at night - he gets drenched in his own sweat and his clothes need to be changed.  His entire body itches all the times and it gets worse during the night. I feel so helpless seeing him suffer so much.” - Mallika.

Although the lump in Abhijit’s neck has been removed, he still is not out of danger. This aggressive form of blood cancer is spreading to the rest of Abhijit’s body; it has already affected his spleen. The doctors think that only a prolonged chemotherapy can help him get better. But Kajal is a daily wager who earns around Rs 200-300 on days he gets some work. He is in no position to arrange for 1 lakh for his son’s treatment. His savings have been used up and now he has no one to turn for help.

“He complains of a severe pain in his stomach and more often than not he runs a temperature. These days he hardly eats anything because of his illness. I look at him and tears roll down my face as I think that I will lose him without any treatment.” - Kajal.

14-year-old Abhijit has been diagnosed with Hodgkin’s Lymphoma and the only thing that he needs is a prolonged chemotherapy. The poor family cannot arrange for the money but they are desperate to save their son who has his entire life before him. Your kind contribution can help this little boy get a healthy life.

Your support will save Abhijit 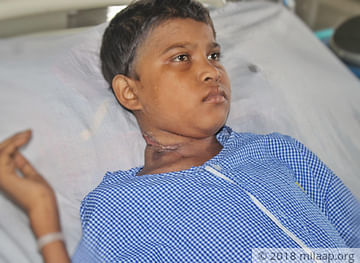 14-Year-Old Will Succumb To Deadly Cancer Without Treatment

UPI: rzpy.givetomlpabhijitl001@hdfcbank (Copy to clipboard)
Or
Click here to read the instructions before you make a bank transfer.