This 4-Year-Old's Rare Liver Disease Can Turn Into Cancer And Its Only Cure Is Beyond His Parents' Means | Milaap
loans added to your basket
Total : 0
Pay Now

Shares
Shares
Share on whatsapp
4-year-old Aarav has never been too keen to play with kids his age. He has seen them enjoying in the park but has never wanted to go out. ‘Mumma, they will make fun of my bloated stomach. I don’t want to go play with them’ - Archana remembers him saying this.

“Aarav has been suffering from a liver condition almost since birth and has always been under medication. Now his condition has worsened like never before. His liver is failing rapidly and the only thing that can save him now is a liver transplant,” - Archana, mother.

While it was clear that his liver was having problems, nothing specific could be diagnosed

Aarav had jaundice since he was just 15 days old. Despite being on medicines, he started developing symptoms of itching, yellow eyes, light colored stools and unexplained fevers when he was 4 months old. They knew it was the liver but the doctors couldn’t come up with a specific diagnosis.

“But we always took Aarav for regular blood tests and ultrasounds. The constant itching was a problem. Besides that, his condition was under control. It was only in October, last year when we got to know about his condition. They said it was a genetic disease - we were at a loss,” - Lokesh, father.

Little Aarav has been diagnosed with Progressive familial intrahepatic cholestasis (PFIC2). It is a genetic disease due to which liver cells are unable to secrete a digestive fluid called bile. The buildup of bile in liver cells leads to liver failure. Aarav’s body also has low levels of fat-soluble vitamins (vitamins A, D, E, and K) in the blood. He needs to take oral supplements and sometimes even injections for them.

“Even after his diagnosis, he was under medicines but clearly they weren’t helping. His became very sick this January and was running a high temperature. We had to admit him to the hospital and soon we realised that without the transplant we will lose him.”

Lokesh used to work in a private company and made decent money. But since Aarav’s birth, a large chunk of his salary has been spent on his son’s tests and medicines every month. He has already spent around Rs 3 lakhs.

“My job paid me well but I was mostly out of town for work. With Aarav falling sick every month, Archana couldn’t manage on her own. I quit my job to be with her. But my savings were mostly over by then. I have also been paying EMI for my flat. So, now it is impossible to arrange for Rs 16.5 lakhs for the transplant. Please help me.”

Archana is a matched donor for her son but the parents are now worried about the expenses. Lokesh’s insurance didn’t cover the costs for the treatment because PFIC 2 is a genetic disease. His savings are now over and he knows that without help he can never afford that life-saving transplant for Aarav. A small contribution from your side can help Lokesh get his little boy treated and bring him back home.

You can help Lokesh and Archana save their little son 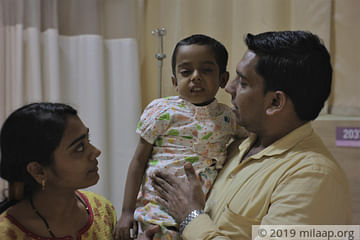