Domestic Help’s 4-Year-Old Has Cancerous Tumor In Brain That Will Take His Life Without Urgent Treatment | Milaap
loans added to your basket
Total : 0
Pay Now

“One day, my son was playing with his favourite toy, and as I was finishing some work in the kitchen, I could hear him singing. But suddenly, the singing stopped and I heard a loud, painful scream. I ran to see him lying on the floor, holding his head, curled up on the floor. He was crying and constantly saying “amma, it’s paining” and I didn’t know what to do. I held him in my arms and took him to the hospital. My son has been suffering from severe headaches and seizures because of the tumour in his brain. I have to take him to the hospital every 15 days because of the unbearable pain. Every day seems like an endless struggle for him.” – Manasa, mother

Manasa lives with her husband Raju and her two children Umesh (7) and Charan in Rahuri, Maharashtra. The couple works as domestic helpers to look after their family. Charan was always excited about going to school. He just started learning the alphabet and numbers. Every day he would recite all the numbers and letters that he learnt in school to his mother. Manasa was so happy watching him learn and grow. But one night, as he was sleeping, he started having uncontrollable seizures all of a sudden. Supriya couldn't think of anything else but to save his son.


“ I got scared when he got seizures and his body started shaking uncontrollably. That was one of the worst nights of my life. And ever since then he has never been better. With each passing day, his health is only worsening.” - Manasa, mother

Charan is diagnosed with medulloblastoma, a deadly brain tumour that starts in the lower back part of the brain which is called cerebellum that is responsible for balance, movement and muscle coordination. Charan had to undergo an immediate surgery to remove the tumour. Raju and Manasa got the surgery done with great difficulty, but much to their despair, Charan wasn’t getting better.

While Charan was undergoing the surgery, the doctors found out that a tumour has spread to his spinal cord. Now only chemotherapy with radiation therapy can save Charan. The tumour can spread to the other parts of his body if not treated in time. Charan needs to undergo chemotherapy for 2 years to recover from this fatal condition.


“My son has stopped eating food fearing that he will vomit it immediately. He is becoming so weak that now he doesn’t even have the strength to get up from his bed. I want nothing more than my son to be healthy again. I cannot see him going through this struggle each day. “ - Manasa, mother

Charan's parents did everything they could to start his treatment, but now they're struggling

Raju and Manasa earn a meagre income of 10000 per month together which is not even enough to meet their household needs. To save his son from a dreadful disease, Raju sold his only piece of land and asked help from everyone that he knows of. He somehow managed to start the treatment and has spent 7 lakhs so far. But now having no money left, the distraught parents are struggling each day to meet the expenses of the treatment.


Charan with his family when he was healthy

Little Charan has just started learning the alphabet and numbers in his school. But his sweet childhood has been taken over by a dreadful tumour that will take his life without treatment. With great difficulty, they could arrange money for the treatment but even that is not enough to continue the treatment. The poor parents can only save their child with your help.

Your support can give Charan a new life 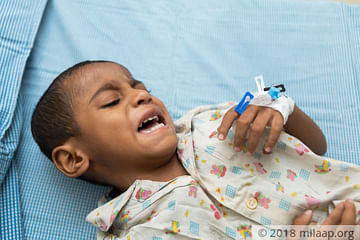 Only urgent chemotherapy can save Charan from this deadly tumour.