Shares
Shares
Share on whatsapp
I was standing on the corner of a quiet street next to an all girls’ school, when Sumathi and her husband pulled up on a motorcycle. There was nowhere to sit, so we stood in the shade of the wall surrounding the school while I used the seat of the motorcycle to take down notes during out conversation. Down the road was a public water tank that was leaking. Somebody had stuck a funnel of what looked like laminated paper into the leak, and was using it to collect water.
I asked Sumathi about how her business was going. She said that she had four goats, which the grandparents were watching at the house while she met with me. Sumathi told me that she sells about 5-6 goats per year, and most sales occur during festival times. Each goat fetches between Rs. 4000 to 8000, depending on its size. Sumathi lives in the village of Karikali, which she said has 184 households and is known for its pineapples. Sumathi is an agricultural laborer, and on most days farms onions and makes Rs. 100-150 per day. I wondered how Sumathi could work in the field and look after her goats, but she said that she just takes them to the field with her. “They are easy to take care of,” she said, “they just eat vegetable scraps.” Sumathi seems content with her goat rearing business, as it allows her to continue her work and make extra income at the same time. 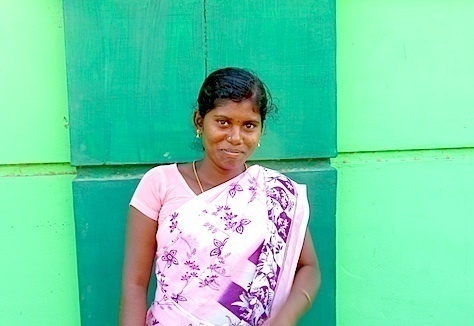