10-year-old Thought He Had Acidity But Is Actually Is Fighting Against Cancer | Milaap
loans added to your basket
Total : 0
Pay Now

You are sending a message to
Garvita
Go back

“They are good people. They should not be suffering so much!” says Tanveer, a close family friend of Sumanyu, a 10-year-old boy battling cancer.

Sumanyu's parents Surjeet and Manju Singh have been struggling to see their fighting to stay alive against one of the most deadly diseases. He has been in and out of the hospital almost every day for the past few months.

They Thought It Was Acidity

Sumanyu had been complaining of indigestion a few times. Doctors treated him with gastric medicine. Surjeet thought it was routine and did not worry about this.
At the end of 2016, Manju suffered a slipped disc after falling down the stairs. Since she was prescribed bed rest, Surjeet took his entire family to Varanasi to let his wife recover. Here Sumanyu fell sick again with a fever. His father took him to BHU- where doctors gave him a tablet for the fever.
However, there was another doctor there- one who had worked at AIIMS Delhi. He took one look at the boy, took Surjeet aside, and told him that he suspected cancer.

Surjeet belongs to a middle-class family. The family hails from Patna but they live in Delhi. Surjeet worked at Sahara TV. However, due to the economic crisis, there were troubles with his job. Surjeet did not get paid on time, and sometimes would get coupons in lieu of salary. Finally, Surjeet quit his job to look for a new one. He still has salary pending from his job- but as he quit, he will not get paid anymore.
Manju is a housewife and she hails from Varanasi. The couple has two children - Sumanyu and a 5-year-old daughter.

Cancer, The Most Dreaded Word

Surjeet urgently took his son to Sir Ganga Ram Hospital, Delhi. Sumanyu was admitted on 27th March, and the diagnosis was confirmed in April- Sumanyu had Burkitt’s Lymphoma- a type of cancer that needs multiple rounds of chemotherapy and takes 8-10 months to spend in the hospital.
As of now, two rounds chemotherapy has been done. Sumanyu was sent home on Friday (28th April) to recover from the side effects of chemo. However, by Monday- May 1st, he was back in the hospital.
He was admitted with 101 fever and his platelet count became dangerously low- 17,000.

A Community Came Together For Support

Surjeet and his family stay in a society called Mahagun Puram in Delhi. The entire colony has been strongly supporting Sumanyu. Residents have come by and contributed blood as and when needed. They are praying for Sumanyu to get well and start playing again.
Now, Surjeet and Manju spend all their time in the hospital. Manju’s sister has come to Delhi and is staying at their house and takes care of Sumanyu’s sister- who has just started going to school. Manju comes home only for a couple of hours every day to see her daughter. She is still battling with her back problem- but has no option but to stay strong for Sumanyu.

Surjeet has run out of money after all these medical expenses. Sumanyu’s treatment is estimated to cost around Rs 10 lakhs- something that the family has no means to afford. The family is desperate to save their boy. Surjeet has been struggling with his wife’s illness and now his son’s medical diagnosis. Help Sumanyu beat cancer!

Click here to make a contribution and save this 10-year-old!
Donate 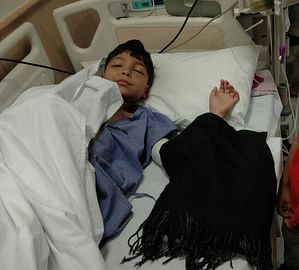 Sumanyu will not survive without this treatment

His condition is deteriorating and his family is struggling to get the funds to treat him.